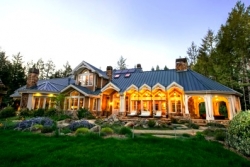 Cazadero, CA, May 09, 2016 --(PR.com)-- Double Bar Z Ranch has won multiple awards for sustainability such as the NARI REMMIES award where it took first place for green building and the CLCA Trophy Awards where it took the prestigious Bob Bair Memorial Trophy for the landscaping on the Buck property. It has also had multiple commercials filmed on site for well known companies such as Jeep, Met Life, and Apple.

This lodge-style house is a balance of sustainability, luxury and interdependence with nature. To achieve the feeling of being outdoors while indoors, the landscapers strategically placed native boulders at the base of the exterior walls and around the house. To complete the plan the home was designed with triple glazed windows which are sustainable but also allow the homeowner to feel as if she is outdoors while she is still protected from the elements.

19540 King Ridge Road was built so that it is as close to zero-net energy as possible. To achieve this in a 5,070 square foot house with 15 rooms is no simple task. The owner wanted 7 fireplaces in the house and to do this while maintaining a low carbon foot print was the use of propane to fuel some of the fireplaces that were installed. In addition, a photovoltaic energy system is linked to a battery backup and a propane-fired generator. Maintaining the temperature in a home as large as this one was accomplished with R-60 Insulation for the roof and ceiling, R-40 insulation in the walls and solar thermal heating. No VOC finishes were used in the construction of this house to help authenticate its sustainability.

The landscape of the property played into helping the home maintain its self-sufficiency as well. 67% of the landscaping plants used on the property use very little water and permaculture ponds take advantage of rainwater storage. The Ephemeral ponds and rain garden are interspersed with native wildflowers and shrubs that compliment the Cazadero climate.

The 722 acre property backs up to Austin Creek State Recreation Area, with its rugged topography and abundant wildlife that gives people a sense of retreat from their daily lives. Ranging elevations within the park gave rise to a variety of habitats including woodlands, meadows, rolling hills and dense redwoods. This attracts a wide range of wildlife that feels protected and quite at home both on the park and where they cross over onto Double Bar Z Ranch.

Now for the first time since the house was built, the property is being sold. Ms. Buck has listed her property with David Millar at HomeSmart Advantage Realty for $11,988,000. The luxury sustainable residence is not the only structure on the property though. There is also an active vacation rental and a retreat cabin that sits on its own private pond with a dock. Equestrian stables and riding arena were built to house livestock and other animals.
Contact
Millar and Company
David R. Millar
707-217-1786
http://www.russianriverlandandhome.com
Home Smart Advantage Realty
BRE#01354778