Los Angeles, CA, July 26, 2016 --(PR.com)-- Daniel Baldwin has joined the cast of the Native American film, "Red Man's View." Baldwin is well known for his film and television career, with roles such as Detective Beau Felton in the popular NBC TV series Homicide: Life on the Street, Ned Blessing: The True Story of my Life (1992), Mulholland Falls (1996), Vampires (1998), The Pandora Project (1998), Stealing Candy (2002), Paparazzi (2004), Grey Gardens (2009), and Celebrity Big Brother (2015). and he is also the second eldest of the four actor Baldwin brothers (Alec, William and Stephen). Baldwin will be playing a psychotic, self-proclaimed 'Zealot' and 'Indian' hunter Squatter Silas. Also in the "Red Man's View" cast is Saginaw Grant (The Lone Ranger), Billy Drago (The Untouchables, Delta Force II), Zahn McClarnon (Longmire, The Red Road), and Michael Spears (Dances with Wolves, Bury my Heart at Wounded Knee). "Red Man's View" is a remake of a short silent Biograph film from 1909, but the new feature co-production by Magic Introduction Co. goes much further than its predecessor did, showing the disenfranchised Band of Shoshone caught in the midst of the American 'Civil' war, the attempted extermination of Native Americans, and bringing to light much of the Native American history that has been ignored for so many years. This is why this film may be the most powerful and important Native American film that has ever been done. Producer Thomas R. Bond, II says, "We are very happy that Daniel Baldwin is a part of this historic film, and hopefully this will bring attention to the general audiences of true Native American history." Bond is also very proud that this film is showing Native Americans as 'People,' rather than the usual 'Hollywood' stereotypes, "This film is something everyone can relate to; Family, hardships, and strength in adverse times."
Contact
Magic Introduction Company
Thomas Bond
818-856-1220
www.redmansview.com 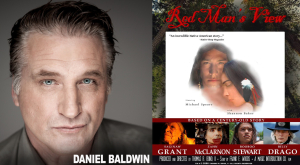