Ajura has integrated the iOS 10 CallKit feature, so users will now have the calling experience of the native iPhone application when they make or receive calls using the Ajura application.

Bukit Batok, Singapore, January 11, 2017 --(PR.com)-- Ajura Pte. Ltd., publisher of the Ajura mobile app announced today that it has integrated the iOS 10 CallKit feature. Ajura users will now have the calling experience of the native iPhone application when they make or receive calls using the Ajura application. This integration will bring a much improved calling experience to iOS users.

Announcing the feature launch, CEO of Ajura, Mr. Sanjit Chatterjee, said, “Integrating the iOS 10 CallKit takes us a step ahead in our endeavour to ensure improved calling experience for Ajura users. We have been able to implement this feature of iOS 10 in quick time and will allow Ajura users to dial out Ajura calls from their native call history list.”

Users of VoIP based mobile apps have a poor usage experience, when they receive a GSM call whilst they are on the data call – the data calls would either get disconnected or go on hold, with the phone ringing as the Native OS gave priority to the GSM call and wasn’t able to detect that the data call was in progress. With the iOS10 CallKit feature, Ajura users will not face any call interruptions and be able to see the incoming GSM call in a call waiting mode.

Ajura allows users to save up to 90% on their international roaming bill and also facilitates them to remain connected on their home country mobile number. In addition to it’s innovative low cost roaming feature, it also offers outcall packages and ability to buy phone numbers of more than 50 countries, which ring on the home country mobile number of the Ajura users. 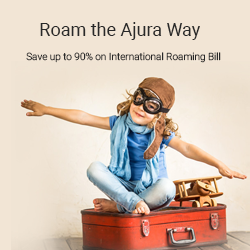