The Eric Hoffer Award has released the list of Finalists and Winners for the 2017 annual award. Chris Lindberg's "Devil in the Dark" was among the top finalists for both Commercial Fiction and superior cover art.

"Devil in the Dark" by Chris Lindberg was recently awarded Honorable Mention in the category of Commercial Fiction as a finalist for the Eric Hoffer Award. In addition, the novel was also a finalist for the da Vinci Eye award for superior cover artwork.

The Eric Hoffer Award honors the memory of the great American philosopher Eric Hoffer. This international award honors books from small, academic and micro presses, including self-published offerings. In addition to the grand prize, Hoffer honors are bestowed by press type and category, and also through the Montaigne Medal, da Vinci Eye, and First Horizon Award.

Winners and finalists are determined based on salient writing and are intended to highlight and honor freethinking writers and independent books of exceptional merit. "Devil in the Dark" is a fictional thriller. The story launches with an unprecedented attack on a U.S. Border station and quickly escalates from there. Readers are introduced to well-developed and thought-provoking characters that take them on an unbelievable adventure through Mexico’s most terrifying drug underworld. The sinister plans of Mexico’s most powerful drug cartel force the three main characters, Otis, Enrique and Rage to form an unlikely alliance to thwart an imminent attack on the United States. The outcome is as breathtaking as the numerous twists throughout the book. "Devil in the Dark" is the follow-up to Chris Lindberg's debut novel "Code of Darkness," a Foreword Reviews 2011 Book of the Year Finalist. 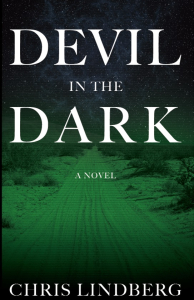 Devil in the Dark

Devil in the Dark book cover