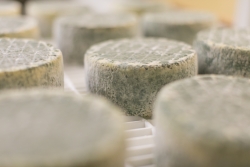 In the first year of submitting an aged cheese to the Competition, Caputo Brothers Creamery’s Ricotta Salata Vecchio won first place in the Traditional Regional Italian Cheese category. The Ricotta Salata Vecchio is made from the Creamery’s whey-based ricotta, salted and aged for at least 6 weeks. This cheese is higher in moisture than traditional ricotta salata, allowing for a natural rind development that gives the cheese a distinct flavor.

After studying the original product in Italy, cheesemaker Bill McGinnis knew that he wanted to master this cheese. “I knew as soon as we developed our new aging cave, that this was the first cheese I wanted to perfect. It’s a real thrill to see Vecchio recognized by the cheese community.”

This year, 281 companies across 36 U.S. states, four Canadian provinces, as well as Mexico and Colombia submitted a record 2,024 cheeses for this year’s ACS Judging and Competition, held during the ACS Annual Conference July 26-29. Founded in 1983, ACS encourages the highest standards of cheesemaking, focused on safety and sustainability. The goal of the ACS Judging and Competition is to give positive recognition to those cheeses that are of the highest aesthetic and technical quality.

“We are so thrilled to have earned this incredible honor from the American Cheese Society,” said Rynn Caputo, President of Caputo Brothers Creamery. “We are dedicated to crafting cheeses reminiscent of our training in Italy, so to specifically win the Traditional Regional Italian Cheese category is a major source of pride for our team.”

About Caputo Brothers Creamery
Deciding on their honeymoon to quit their Fortune 500 jobs, David and Rynn Caputo attended culinary school in Calabria, Italy for four months. After traveling across all twenty regions of Italy, they knew they were destined to make their culinary passion their life’s work. Upon returning to the States and recognizing the void of cheeses they had grown to love, the idea for a creamery was born, and aptly named after their sons, Giovanni and Matteo - The Caputo Brothers. Caputo Brothers Creamery, based in Spring Grove, Pennsylvania, has produced handcrafted, authentic Italian cheeses since 2011.
Contact
Caputo Brothers Creamery
Kyle Carter
717-850-6045
caputobrotherscreamery.com
Main line: 717-739-1091 (president: Rynn Caputo)