Dick Pirozzolo Marks Veterans Day with Call to Hire Returning Servicemen and Women, Citing Leadership and Other Skills Gained While Serving Their County

Boston public relations agency founder recalls the leadership and other skills veterans acquire on active duty in the US and in overseas, and how those lessons apply to benefit civilian employers. His comments are part of an interview with this Air Force Veteran who launched his career while on active Dduty. 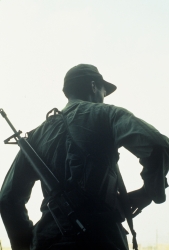 Boston, MA, November 11, 2017 --(PR.com)-- November 11 is a day set aside to honor those who served in the armed forces. There will be parades, flag waving, speeches, ceremonies dedicated to American military people and there’ll even be free pizza and coffee at chain restaurants.

As well as the occasional: “Thank you for your service,” from fellow Americans. Dick Pirozzolo, Managing Director of Pirozzolo Company Public Relations in Boston and coauthor of "Escape from Saigon" with Michael Morris wants employers to hire veterans. "I can't think of a better way to honor and thank our veterans, than to make sure they come home to a job that recognizes the skills they acquired in the military."

He recalls, "When Vietnam veterans returned, we met resistance from potential employers who wrongly claimed military people are too regimented, unfamiliar with latest civilian technology, and can’t think for themselves. Sometimes, opposition to the war resulted in opposition to veterans."

He encountered creative ways of calling vets “losers” back then. Recalls Pirozzolo, "In one case, a reporter for The Boston Herald wrote that she went to the Pine Street Inn - a Boston homeless shelter - to get 'the veterans’ point of view.' Never mind that John Kerry and the CEO of State Street Bank were veterans, who were hardly residing at the Pine Street Inn."

He explains that during a job interview, a potential employer discounted my entire military experience by asking: “Don’t you feel your career doesn't really start until after the service?”

Pirozzolo added, "It was as if my four years in the U.S. Air Force didn’t exist. Fortunately, I learned my craft, public relations and journalism, in the Air Force through formal schooling, at the Defense Information Officers School (DINFOS), and on-the-job training."

The Worcester Telegram & Gazette recognized Pirozzolo's capability and hired him right away. A year later the late Jack Star, who headed up PR at Boston University, hired him for the international media relations skills he acquired as an Air Force press officer in Saigon.

In addition to specific job skills, Veterans come home with general leadership and management skills, and other qualities that are a huge benefit to civilian employers, observes Pirozzolo who outlined those qualities in time for Veterans Day.

"Veterans develop leadership skills," says Pirozzolo, adding, "Whether officer or enlisted, the military does not hold back when it comes to putting people in charge and, often in situations that are way above the job description. To be sure, I made plenty of mistakes when I was a second lieutenant, but the most valuable lessons I learned was to listen and learn from the enlisted folks who had years of experience and technical skills far superior to mine."

Diversity and equal rights. "The armed forces are not without problems when it comes to gender and race and, in most cases, commanders deal with sexual misconduct and discrimination quickly and definitively. Nevertheless, the military has been way out in front on race relations that began with the full integration of our armed forces after World War II and ongoing efforts since then that include the integration of the LGBT community into the military," says Pirozzolo.

He adds, "Simply put, rank matters. Race and sex do not. No one tells the female lieutenant to make coffee or the African-American captain to make photocopies!"

Another skills is the ability to improvise. "When a four-man squad goes on patrol, there may be command and control from headquarters, but the squad leader, probably a young 20ish soldier, will make hundreds of life-and-death decisions to complete the mission and return everyone safely," says Pirozzolo.

The doctrine of completed staff work means that when a team has a job to do, the job is completed totally before presenting the results to the commander or superior who delegated the responsibility. "Of course, not every project goes according to plan and obstacles come up. In those cases, the presentation has to be sufficiently complete so that, if more information is needed, all a supervisor has to do is sign a request," this former Air Force officer explains.

He noted, "One of the hard-and-fast rules team members learn is they cannot go directly to their supervisor to get partial approval, or to lobby for their own solution to the problem. This cuts down on a lot of office politicking and backbiting."

Empathy is important. Says Pirozzolo, "The military is often a matter of life and death and people can be together 24/7 where the division between work and off-duty life does not exist. I was always in awe of leaders who could navigate the murky waters of their people’s personal and family issues, while staying focused on the mission. It’s a complex skill that is well taught in the military and applicable to civilian employment."

Pirozzolo recalls, "Military folks believe they can achieve anything. After returning from Vietnam, I served with the 253 Combat Communication Group in Massachusetts. We could install all the navigation, air traffic control and communication needed for a temporary airport, while the Navy Seabees, built the runway and erected tents for the whole lot of us. Done quickly and as a matter of routine."
Contact
Pirozzolo Company Public Relations
Dick Pirozzolo
617-959-4613
www.pirozzolo.com