The report shows that pit bulls and rottweilers accounted for 76% of all deaths. The report details the rise of adults killed by dogs, the increasing number of fatal attacks involving 2 or more dogs and examines over 20 other factors. 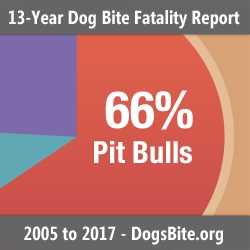 The 9-page report examines the breeds involved in fatal attacks on humans, age groups and genders of the victims, the number of dogs involved, family and dog relationships, property statistics, household and time factors, criminal prosecutions following fatal dog attacks and states with the most occurrences. The report also compares two metrics -- the age of victims and the number of attacks involving 2 or more dogs -- to years previously studied (1979 to 1998).

Over the 13-year period, 21% of all fatal dog maulings resulted in criminal charges. Pit bulls were implicated in 75% of these criminal cases and at a rate 2.5 times higher than rottweilers, the next closest dog breed. The report shows the majority of all dog bite fatalities, 54%, occurred in the Southern United States and details the nine states with the most fatal dog maulings. Texas led all states with 54 deaths. California followed with 45 deaths and Florida with 29 deaths.

The report contains multiple tables, including a list of all dog breeds involved, a comparison of two periods within the 13-year period, the rising number of adult victims and the shrinking number of attacks inflicted by a single dog. The tables also show which of the nine states filed the most criminal charges after a fatal dog mauling. Michigan had the highest rate, 31.5%, Texas and Florida filed charges below the national average of 21% and Illinois filed zero charges.

DogsBite.org is a national dog bite victims' group dedicated to reducing serious dog attacks. Through our work, we hope to protect both people and pets from future attacks. Our website, www.dogsbite.org, was launched in October 2007 and contains a wide collection of data to help policymakers and citizens learn about dangerous dogs. Our research focuses on pit bull type dogs. Due to selective breeding practices that emphasize aggression and tenacity, this class of dogs negatively impacts communities the most. Our website hosts important dog bite studies, U.S. dog bite fatalities and other key bibliographies. In the Legislating Dogs portion of our site, we offer examples of breed-specific laws (state-by-state) and documentation of the constitutionality of these laws. The Victim Realities section provides a glance into the unforgettable histories victims leave behind and much more. DogsBite.org operates out of Austin, Texas and can be contacted via 512-650-8510 or press@dogsbite.org. Research contributions and active website participation stems from individuals that span the United States of America and across the world.