Cole was nominated for Best Jazz Vocal Album for his 2018 recording 'My Mood Is You.'

Big Noise has been working with Cole since 2006 as a career consultant and publicist. Al Gomes and Connie Watrous oversaw the entire Grammy Award strategic and publicity team for Cole and his record label HighNote Records.

"This is truly an amazing 100th birthday present to his brother Nat 'King' Cole - who originally conceptualized the Grammys with Frank Sinatra - for The Recording Academy to give his younger brother Freddy a well-deserved fourth Grammy Award Nomination," said Watrous and Gomes. Watrous enthusiastically added, "To my friend Freddy!"

The New York Times just declared Cole "The most maturely expressive male jazz singer of his generation, if not the best alive."

Downbeat echoed this, stating, "Whatever the accompaniment, Cole extracts the maximum from each tune asserting his stature as our greatest living jazz singer."

And JazzTimes says, "He lets the song breathe between words, sometime syllables and savors each word. The delivery is not just impeccable but profound. Mesmerizing storytelling mastery." No one has better music press than this man.

Classical and jazz-trained, vocalist-pianist Cole's latest release 'My Mood Is You' continues his family's rich musical dynasty which includes his brothers Nat, Ike and Eddie and Grammy Award-winning niece Natalie. The CD is Cole's best and most acclaimed recording to date.

"I would like to thank the following for this great honor and nomination:

- The Voting Members of The Recording Academy

- My engineer and mixer Katherine Miller

- To all the great composers and songwriters on this record

- My wife Margaret, my son Lionel Cole, my daughter Crystal Cole, my grandchildren Christina Traylor, Peija Cole, and Caemeron Cole, my brothers Eddie and Ike, my parents, my entire family, and my grandson Tracy Cole

- And to my brother Nat 'King' Cole, who helped start this whole Grammy journey for us all"

Freddy Cole's career has spanned over sixty-five years. He was born and grew up in Chicago, and began playing piano at the age of six. He continued his musical education at the Roosevelt Institute in Chicago. He moved to New York in 1951, where he studied at the Juilliard School of Music, before completing a master's degree at the New England Conservatory of Music.

Cole's influences include John Lewis, Oscar Peterson, Teddy Wilson and Billy Eckstine. When speaking of Eckstine, he recalled, "He was a fantastic entertainer. I learned so much from just watching and being around him."

Cole was inducted into the Georgia Music Hall of Fame in 2007. 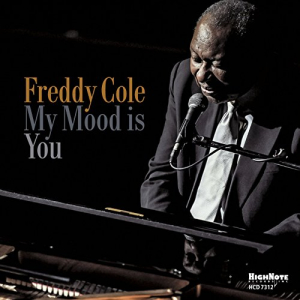 Freddy Cole's Grammy Award Nominated "My Mood Is You"