Samuel L. Boyd is Honored by the Top 100 Registry as the 2020 Attorney of the Year, and is Due to be Featured on the Front Cover of Top 100 Lawyers Magazine's Q4 Edition

Samuel Boyd is featured on the front cover of Top 100 Registry's quarterly Top 100 Lawyers publication. Samuel is a practicing Attorney and Founder of Boyd & Associates, in Dallas, Texas. His firm concentrates their practice in Whistleblower & Business Fraud Cases. 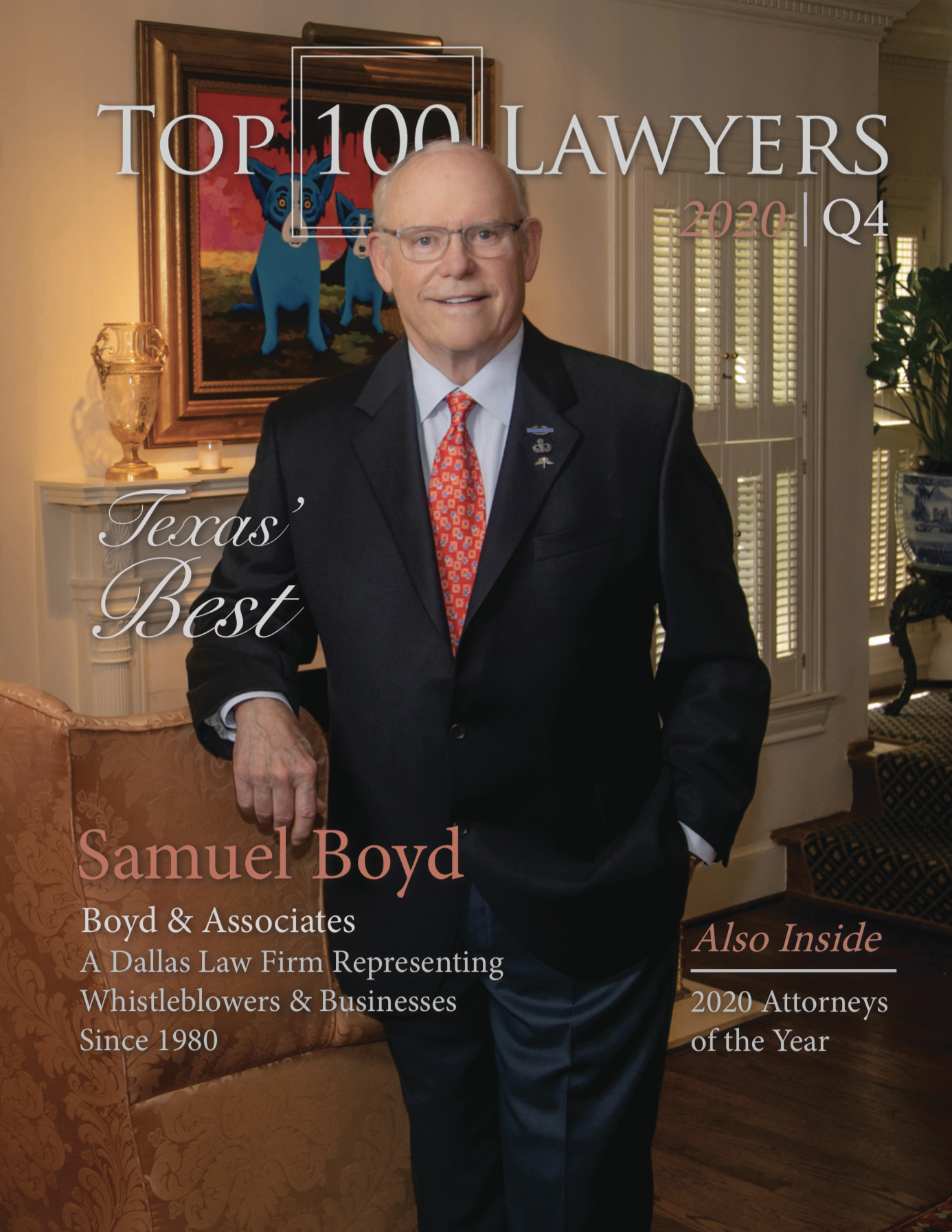 Dallas, TX, October 23, 2020 --(PR.com)-- A Texas native, an Eagle Scout and a former Green Beret Captain, Sam Boyd is the owner of the trial and appellate firm of Boyd & Associates, a leading law firm located in Dallas, Texas. Boyd & Associates has served clients in trials and appeals in state and federal courts throughout the nation. The firm takes on challenging cases addressing important legal issues. They limit the number of cases they handle to enable Sam to stay personally involved in their clients’ depositions, hearings, trials and appeals. The firm's primary focus is Whistleblower cases representing individuals who file suit on behalf of the government under the False Claims Act to hold corrupt companies and Individuals accountable to the taxpayers for money illegally collected under government contracts.

Sam’s practice includes qui tam litigation involving the federal and state False Claims Acts, as well as IRS and SEC Whistleblower claims. The firm has litigated business and securities cases, antitrust and unfair competition cases. Sam founded Boyd & Associates in 1980 with a strong tradition of service to his community and country. The firm undertakes meritorious cases on an hourly rate basis, a contingency fee basis, or may offer a hybrid option.

As a testament to Sam’s reputation for providing excellent legal services, he has received the prestigious AV peer review rating from Martindale-Hubbell, signifying the highest standards of ethical and legal ability. For a number of years, Sam has also been honored as a “Texas Top Rated Lawyer” by Martindale-Hubbell. The National Trial Lawyers Association in 2020 named him to the Top 10 Lawyers, and from 2013 to 2020, to the Top 100 Lawyers. For years, Sam has been a member of the Multi-Million Dollar Advocates Forum. In 2018, The Top 100 Lawyers honored Sam as America's Top Business Fraud and Whistleblower Attorney.

Boyd & Associates' guiding principles are founded upon the firm conviction that, “Whenever your client takes the bold move of speaking out against the largest corporations, they need the assurance and confidence that fearless trial lawyers have their back. When a client brings the evidence, we are armed with the professional ammunition that we need to bring justice to the arena.”

Sam is not only an experienced and accomplished litigation attorney, but he is also an active member of the civic community and a decorated Vietnam Veteran. Sam regularly volunteers as a member of a charitable education organization (Jubilee) in a less advantaged Dallas community. For many years, Sam volunteered as a mentor to third graders at O.M. Roberts Elementary School, and he has served many years on Jubilee's Education Committee. Prior to his legal career, Sam volunteered to serve his country during wartime. He trained as a Special Forces A-Team Demolition Specialist and A-Team Leader before serving in Vietnam. In Vietnam, Sam was an Airborne Rifle Platoon Leader in Combat with the 173d Airborne Brigade (Sep). Sam's awards and decorations include the Combat Infantryman’s Badge, the Master Parachutist’s Badge, the Military Freefall (HALO) Badge, four (4) Bronze Stars (2 with “V” device for Heroism) (2 for Meritorious Achievement in Combat), three (3) Air Medals (Meritorious Achievement During Flight), three (3) Army Commendation Medals, the Vietnamese Cross of Gallantry, the Jungle Expert Badge and other recognition while serving his country. On his path to Special Forces training and Infantry Officer Candidate School, Sam was selected by the Airborne Cadre In the U.S. Army Airborne School as the Distinguished Honor Graduate [1/500] of his Jump School Class # 68-22 at Fort Benning, Georgia.

After his military service, Sam attended Texas Tech University, where he graduated first in his class as Valedictorian with a Bachelor of Arts (BA) with Highest Honors in Mathematics, and first in his class as Valedictorian with a Master of Business Administration (MBA). He then went on to earn his Juris Doctor (JD) from Texas Tech University School of Law, graduating with High Honors, and he was honored In Miami, Florida, as the International Winner of Law Graduate for the Year 1977 by the International Legal Fraternity Phi Delta Phi.

Sam gives credit for his rewarding career to the discipline and competitive spirit honed during his Airborne and Special Forces training and missions for which failure was not an option. Not to be overlooked, his sterling staff has been critical to the quality of work produced by the firm. Sam is fortunate to have enjoyed 41 years of marriage to Delilah Holmes Boyd, who was specially delivered to Sam from a wonderful Mississippi family. Delilah, a graduate of the SMU School of Law and a former editor on the SMU Law Review, has been a motivating force in his life and a co-owner of the law practice they have built together. Sam and Delilah's travels have included many special moments at beaches around the world all of which culminated in establishing a second home and becoming Permanent Residents in the Turks & Caicos Islands in 2006. Sam has a son, Sam Jr. and two grandchildren, Alexis and Seth.
Contact
Top 100 Registry Inc.
David Lerner
855-785-2514
www.top100registry.com