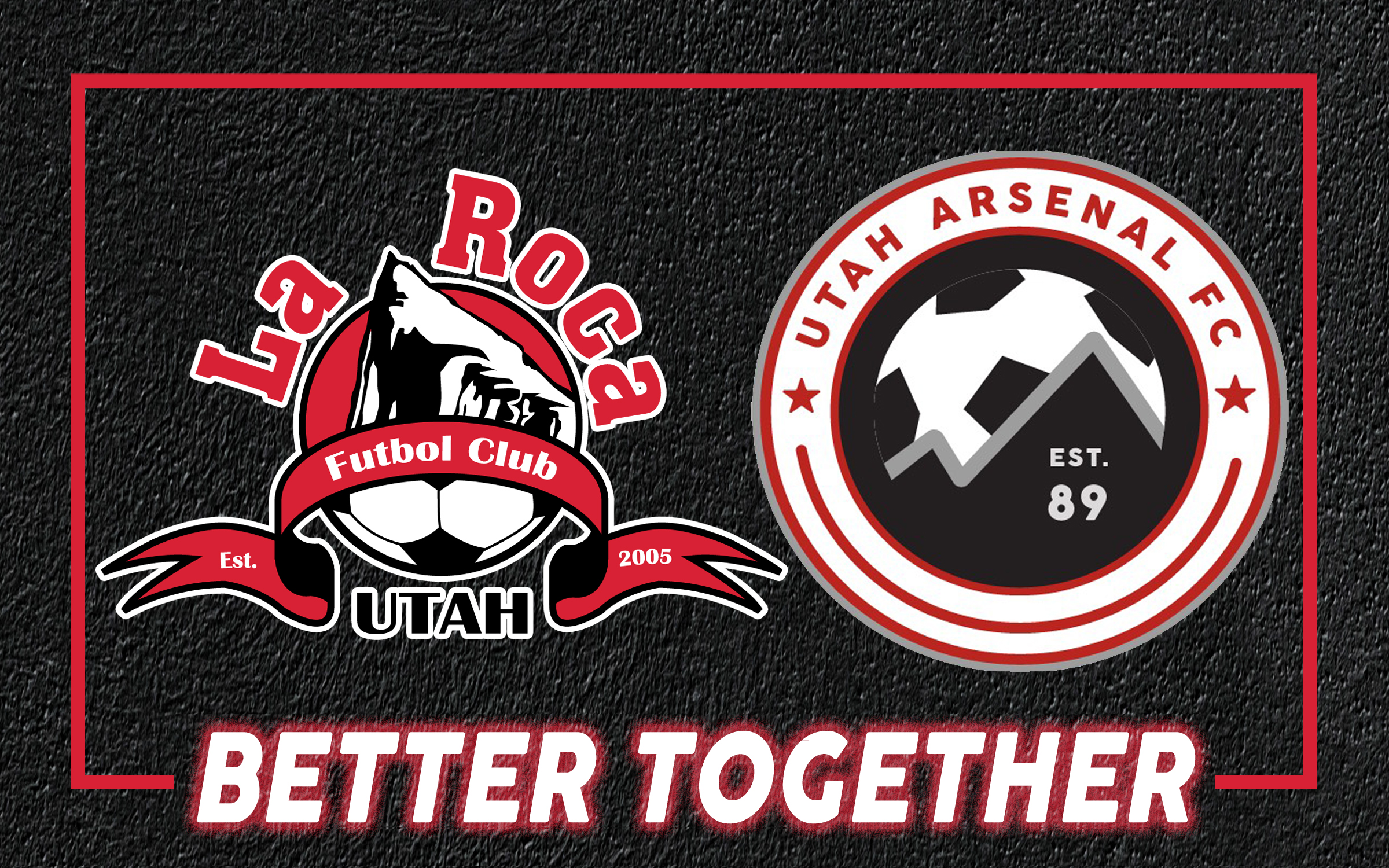 South Weber, UT, May 10, 2022 --(PR.com)-- La Roca FC is proud to announce a finalized partnership with Utah Arsenal FC “UAFC.” By joining forces, La Roca FC and UAFC view this as an opportunity to benefit the membership of both clubs and provide multiple enhanced pathways for all players, coaches, and teams. Through many thoughtful discussions, key stakeholders from both clubs have weighed the value proposition and concluded that La Roca FC and UAFC are better together than they are apart. The combined, unique strengths of both clubs will provide the ultimate experience for players to grow, develop, and reach the next level.

In 2005, La Roca FC was formed and established by former professional player, Adolfo Ovalle in Davis County. After a successful initial five years, the desire to replicate the success of The La Roca Way was urged by Adolfo’s life-long friend and fellow coach, Ariel Bravo. Bravo was then entrusted with the monumental task of expanding the La Roca FC program to Utah County. This was not an easy objective nor one that would happen overnight. With the early support of integral people, a whole lot of persistence, grit and competitive spirit on Ariel’s part, La Roca FC South emerged. The first year was modest with just two teams, then morphed into 19 teams by the third year. Bravo said of this experience, “Over the years, I’ve come to know the people of this community, developed great friendships, and have discovered their immense potential. I assured them the day would come when we would be competitive. Sure enough, with the hard work and dedication of each and every coach and player, just two years in, we won our first State Cup Championship, and since have won multiple Desert Conference League Championships, a Northwest Conference championship, and compete on a national level with four teams in the Elite Clubs National League.”

Under the direction of early leadership, Jerry Preisendorf, the Corbett Family, and Earl Kauffman, UAFC was formed in 1989 in Utah County. Michael Chesler was added in 2018 as the club’s Technical Director. Chesler is a homegrown athlete who grew up playing soccer for Rangers and Sparta and finished his youth career just as La Roca FC was being founded by Adolfo Ovalle. When asked why La Roca FC was a good fit, Chesler said, “I have seen firsthand the impact they have had on the entire state and the opportunities that they have been able to provide for players and coaches. They truly are the most successful club in Utah in regards to preparing and placing players at the next level.”

“Youth soccer in America is evolving and has become more professional,” said La Roca FC’s Founder and Technical Director, Adolfo Ovalle. “I believe that this partnership with UAFC will elevate our club to another level. We are not only growing in numbers, but we are adding some of the best, high-licensed coaches in the state of Utah who are going to bring their knowledge and expertise to support all our teams in the South and make us even stronger. All of them are under the fantastic leadership of Michael Chesler, who has genuinely changed UAFC into one of the most organized and structured clubs in Utah. Bart Preston, member of UAFC Board of Directors, has focused on doing the right thing and has supported Michael every step of the way which has led to the success of this club. I’m thrilled by this partnership, and I believe that the sky is the limit.”

As La Roca FC and UAFC embark on this next collective phase, Chesler went on to state, “I am extremely excited about what this does for all UAFC's current teams, players, and coaches. We have all put in massive amounts of work over the past 4+ years to get to where we are today by recruiting and developing not only some of the best coaches in the state, but also the country; helping our players become the best players they can possibly be, creating a lasting legacy with our amazing complex that allows all our teams a place to train and play together every day, and building a culture that is integral to the lasting success of the club, coaches, teams, and individual players.”

Twelve years later and 370,000 miles on his cars, La Roca South Director of Coaching Ariel Bravo expressed his feelings about passing the baton to Chelser: “For the past five years, I’ve observed how Michael Chesler’s leadership has transformed UAFC. His work ethic and philosophy of the game go hand in hand with our culture at La Roca FC. It is with sincere confidence that I am welcoming Michael as the new leader of this beast I call ‘the South.’ I recognize in him the same spark that inspired me to go after this project in 2010.”

A special thanks and recognition are expressed to the many individuals who helped both La Roca FC and UAFC reach this milestone: Brett Wadley, Cesar Munoz, Rebecca Wadley, Celso Santos, Debbie Francis, Kurt and Angie Nydegger, Paola Tobar Núñez, Tom Fisher, and UAFC Staff, Coaches, and Board of Directors.

About La Roca FC
La Roca Futbol Club was established in 2005 to provide a quality competitive youth soccer program in Utah and has grown to become the most successful club in the state with more State Cup Championship titles than any other club in the state. La Roca FC trains serious youth soccer players who desire an opportunity to develop and showcase his/her skills to the fullest potential. To date, La Roca has produced 20 professional players both domestically and internationally. La Roca FC offers players a chance to play at the highest level of state competition and compete in various regional and national tournaments and leagues. La Roca is a 501(c)(3) corporation under the direction of its Board of Directors.