New Atlantic is pleased to announce promotions within the Executive Management team. 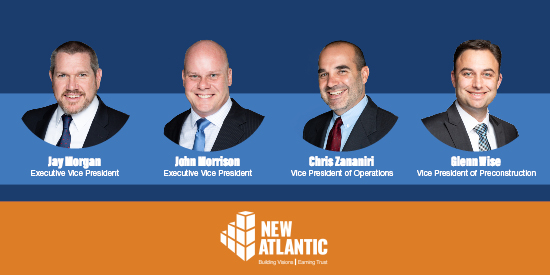 Jay Morgan was promoted from Vice President of Preconstruction to Executive Vice President. He is a founding member of New Atlantic with over 31 years of experience. Jay is a graduate of the University of North Carolina at Charlotte with a degree in Civil Engineering. His ability to visualize a building from the plans enables him to complete a detailed estimate. Jay has worked on a wide range of commercial, industrial, institutional, manufacturing, and religious projects.

John Morrison was promoted from Vice President of Business Development to Executive Vice President. He joined the New Atlantic family in 2006 and has over 24 years of experience. He is a graduate of Napier University in Scotland with a degree in Civil Engineering, and post-graduate degree in Business Management. John has worked in both project management and preconstruction and now uses that experience to lead the business development department.

Chris Zananiri was promoted from Project Director to Vice President of Operations. He joined the New Atlantic family in 2007 as a Project Manager and has more than 23 years of experience. Chris is a graduate of the University of Florida with a degree in Building Construction. Chris has worked in both the private and public sectors on major complex projects that have made him an expert in construction management at risk and design-build.

Glenn Wise was promoted from Director of Preconstruction to Vice President of Preconstruction. He joined the New Atlantic family in 2003 and has more than 27 years of experience. Glenn is a graduate of the University of Alabama with a degree in Civil Engineering. His strength is his ability to connect with clients and keep their priorities and needs at the forefront. Glenn’s construction career includes projects in both project management and preconstruction services.

About New Atlantic
They began in 2002 as a close-knit group of experienced managers on a mission to complete construction projects the right way. They have steadily built a reputation among clients, designers, and subcontractors for integrity and efficiency, for following through on every job, and for creating a culture where family and community are highly valued.

New Atlantic has grown into a collaborative team of dedicated experts across all phases of construction. As an employee-owned company, its people are invested in seeing their partners succeed on every project. Together they continually refine the construction process, finding greater efficiency and enhancing quality from start to finish.