Issue 23 of the free digital Xbox magazine delivers exclusive previews and screens on the biggest upcoming games of the year, including Gears of War 2, The Last Remnant and Far Cry 2. 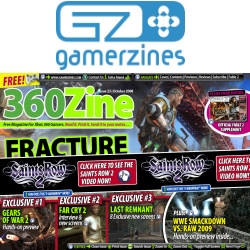 London, United Kingdom, October 04, 2008 --(PR.com)-- Issue 23 of 360Zine is now available for free download from GamerZines.com, the portal for free digital magazines for gamers. It includes an exclusive hands-on preview of Gears of War 2, along with confirmation of an upcoming digital magazine dedicated to the game.

The issue also has the world’s first English screenshots of The Last Remnant from Square Enix, exclusively available in the magazine’s preview and included in an exclusive screensaver available within the magazine itself.

Continuing the raft of exclusives in the issue, the magazine has an interview with the developers of Far Cry 2 complete with exclusive screens and two exclusive desktop backgrounds, also available directly from the magazine page.

Lastly, there is an exclusive interview with the Velvet Assassin developers and exclusive screens to go with that.

“This issue we’ve pulled out all the stops. It’s our biggest ever,” comments Dan Hutchinson, Editorial Director. “We’re bursting with world exclusives on four of the most anticipated games of the year, and we’ve also included an exclusive 19 page supplement for Fable 2, complete with its own exclusive screens and screensaver.”

The issue also includes hands-on previews for WWE Smackdown vs RAW 2009, Saints Row 2 and Guitar Hero: World Tour, plus reviews of the latest Xbox 360 games, including Star Wars: The Force Unleashed and FIFA 09.

All GamerZines.com magazines including 360Zine are professionally written and produced by a team of games journalists and publishers with decades of experience in the magazine industry. The portal offers free monthly magazines for various games platforms in interactive PDF format. All the magazines are enhanced with rich media and extensive video of the games in action.

Readers do not need to register to download the magazines, which are all completely free. All that is required to view the magazines is Adobe Reader version 6 or above on Windows or Mac, and a broadband internet connection.

Gamers can download this issue of 360Zine for free now from http://www.gamerzines.com/