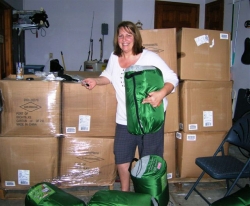 HelpKeepWarm.org coordinates their Tampa distribution with T.H.O.R.N., an organization that feeds 300-400 homeless every Sunday. This year, the distributions are scheduled in Tampa at:

1:20 p.m. at Adamo & Columbus in an empty field (heading east go north on 50th street to right on Columbus to several blocks down to open lot on the right)

And, if bags remain, at 3:20 p.m. at Jefferson & Cass (behind the Greyhound bus station across from the Twigg Street Court House in a parking lot.)

HelpKeepWarm.org also has given 30 new sleeping bags to the Homeless Coalition for Hillsborough County for a ceremony they are holding on December 22 to honor those homeless that died in our streets during 2008. They will give the bags to the homeless that attend the ceremony. Another 20 bags have been distributed through the soup kitchen at St. Francis Catholic Church in Seffner.

“The biggest news since last year’s distribution is HelpKeepWarm.org is now 501c 3 status and we are talking to Coleman about volume bag distribution on a national basis,” South notes. “The bags will have the HelpKeepWarm.org logo on them, be pre-marked not for resale, and be shipped with no inside packaging. Less package is green friendly and a lot less work for the people distributing them.”

As the organization’s finances and visibility grow, manufacturers and retailers are making generous responses to requests for assistance, South said. “Coleman sold us bags at a substantial discount with free shipping. Bags that would have cost us $29.88 at standard retail were $17.88 – and these are their top-quality bags rated to 30 degrees.”

Donations received in the last two weeks were used to purchase sleeping bags with generous discounts from Dick’s Sporting Good in Brandon. “They gave me a 15 percent discount, did not charge the 7 percent sales tax (some retailers will not take the tax off for non-profit groups), and bent over backwards to get as many bags as possible in such short notice during the holidays,” South says.

Helpkeepwarm.org was founded last year in memory of Mark South (1954-2006). Its goals include growth to include national distribution and healthy-living housing by 2012.