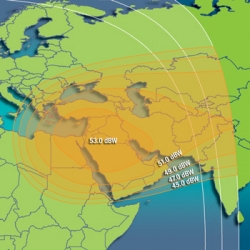 Warsaw, Poland, January 30, 2009 --(PR.com)-- TS2 Satellite Technologies' network in Iraq and Afghanistan has over 15 thousand military users of local broadband satellite connections. "We were among the first telecommunications operators in the satellite technology in the territory of Iraq and Afghanistan and as such we have enjoyed a successful cooperation with the US Army for several years now" - says Marcin Frackiewicz, CEO of the TS2 Satellite Technologies.

TS2 Satellite Technologies offer two-way high-speed internet access with no phone lines, no cable, no dial-up modem. It's always on, available virtually anywhere, and affordable. The laptop, or WLAN network, can receive internet signal through a special satellite VSAT modem which is usually set up in a building or tent when deployed.

To the soldiers stationed in the war-torn countries, one VSAT access point provides broadband access to the internet; telephone connections including voice over internet protocol (VoIP), IP phone and video-conference connections. In addition, soldiers can also transfer data to many other users simultaneously and share connections with others stationed in the same base. TS2 additionally equips its customers with Thuraya, Iridium and Inmarsat satellite telephones, which are often the only means of communication in this region of the world.

TS2 delivers satellite equipment specially for U.S. Military Personnel, Contracting Officers and DoD Contractors to many military addresses in Afghanistan, Iraq and the Middle East within a maximum of 5-7 days .

iDirect service on Intelsat 10-02 in Iraq and Afghanistan