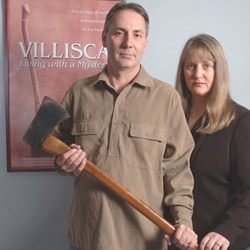 Des Moines, IA, October 29, 2006 --(PR.com)-- The weapon used in Iowa’s worst mass homicide, the 1912 Villisca axe murders, will be donated to representatives of the Villisca Historical Society, Inc. (VHSI) on Halloween night at the State Historical Society in Des Moines.

The axe used in the slayings of eight people originally came from a coal shed behind the victims' home in Villisca. The state's official investigation of the slaughter of the entire Josiah Moore family and two visiting Stillinger girls ended in 1917 with the acquittal of English minister Lyn George Jacklin Kelly, the only person charged with the crime.

According to Iowa law, evidence in criminal cases can be disposed of after two years and Attorney General Special Investigator and later Iowa Bureau of Criminal Investigation Chief James Risden gained possession of the axe. Researcher-Writer Don Brown acquired the axe from Risden's widow and later gave it to fellow researcher Epperly. Dr. Epperly has spent over 50 years studying the mystery and is considered to be the foremost authority on the case. The crime is as intriguing as the Black Dahlia murder.

President Dr. Mary Hansen, will accept the artifact on behalf of VHSI, and the State Historical Society of Iowa has agreed to store the axe until the new organization acquires a building. The donation completes Epperly's long-time plan to donate the artifact to a historical society.

The presentation of the weapon will be followed by a special Halloween screening of the documentary feature film "Villisca: Living with a Mystery" at 7:00PM on October 31, 2006 at the State Historical Society in Des Moines. The documentary chronicles the events surrounding the 1912 Villisca axe murders. The award-winning and critically-acclaimed film features on-camera appearances throughout by Epperly, who also served as the documentary’s primary consultant. The documentary was produced by Kelly and Tammy Rundle of Fourth Wall Films in Los Angeles, California, and has been released nationally on DVD for Halloween.  The film will be broadcast on Public Television later this year.  Visit http://www.VilliscaMovie.com for more information.