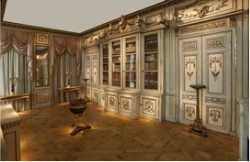 New York, NY, September 15, 2010 --(PR.com)-- Carlton Hobbs, the leading specialist in museum quality 17th-19th century British and Continental furniture and decorative arts, has announced that a new selection of rare furniture, paintings and objects, will be on view for the first time at his New York gallery, the former Vanderbilt mansion, located at 60 East 93rd Street in New York.

"We are very excited to present over twenty-five new acquisitions which will take their place in our gallery," said Stefanie Rinza, the company’s managing director.

Among the highlights are an entire extraordinary French 18th century room, comprising gilt and white painted paneling, bookcases and chimney piece from the library of the Hôtel Gaulin, Dijon, which was first acquired from its original home by J.P. Morgan Jr., one of the most celebrated collectors of the twentieth century. He bequeathed this room to the Metropolitan Museum of Art in 1923, which declared the library as “the richest of the [rooms] in the matter of decoration,” and had it in its permanent exhibit for over 20 years. It was later on view in the Los Angeles County Museum of Art in the early 1950s and it is as a result of its long-term museum history that it is in the most unusual untouched original condition.

A further item of interest is a magnificent monumental alabaster vase with fine Etruscan red and black painted decoration. Standing over four-feet tall, it takes the form of a volute krater, an ancient Greek vessel used for mixing wine and water. Though the design of this vase does not appear to be a direct copy of an ancient example, its decoration very closely relates to a few known examples, most notably the “Hamilton Vase,” among the most prized pieces in Sir William Hamilton’s collection and featured in Baron d'Hancarville's great publication of Hamilton’s vases, Antiquités Etrusques, Grecques et Romaines.

Among the paintings and drawings, an early 19th century watercolor measuring over 6 ft in length is of note, which depicts The Admiralty Screen, a large beautifully detailed wall designed by Robert Adam. This wall which still stands on London’s Whitehall today, was intended as a screen to separate the Admiralty Complex, from the street.

A most unusual Regénce red and gilded armchair will be on display together with a number of early 18th century Spanish and colonial pieces in their newly decorated South gallery on the second floor. This chair is notable for its highly elaborate carved back and the interesting configuration of its supports.

Carlton Hobbs is particularly looking forward to the arrival of a large and unusual gilded iron mid 20th century rectangular center table in the manner of Gilbert Poillerat, which was acquired for its chic design combined with its strong relationship to the tradition of French 18th century gilded iron work.

Lastly, Carlton Hobbs is working on a number of events at the moment: hosting the launch of Thomas Hamel’s first book ‘Residence’ on September 21st, which details the work of this highly talented Sydney based designer, preparing for an ‘Open House’ during mid October and also getting ready for this year’s San Francisco Fall Antiques Show, from October 22-28,” where they will have more than doubled their display space.

Carlton Hobbs is a noted independent dealer in rare antique furniture and historic objects. Founded in 1973 and headquartered in New York, in the former Vanderbilt Mansion at 60 East 93rd Street, the firm acquires researches and sells antiques to museums and discerning clients throughout the world.

Some of the world's leading museums and private collections now house Carlton Hobbs' pieces including, amongst others:

Carlton Hobbs is located at 60 East 93rd Street, between Madison and Park Avenues in New York. Opening hours are Monday through Friday, 9 am to 6:00 pm. For more information, please call 212-423-9000 or visit www.carltonhobbs.com.