Explore & Relive 300 Years of History in Just One Square Mile 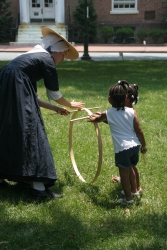 Dover, DE, January 24, 2007 --(PR.com)-- For those who love history and also for those looking for affordable, valuable and enjoyable family vacations, The First State Heritage Park at Dover is a site that ought to be included on their event calendars and must see vacation spots. Established in 2004 by Governor Ruth Ann Minner, The First State Heritage Park at Dover is the state’s first “park without boundaries” and links several dozens of historical and cultural sites of Dover – the capital city of Delaware.  Dover is the home to what is considered by many to be one of the most beautifully preserved capitol complexes in the nation. Dover has two historic districts on the National Register of Historic Places.

Explore and relive 300 years of history within one square mile

IMPORTANT American history: First State to ratify the constitution  = Delaware – signed at a local water hole of the day – the Golden Fleece Tavern

An urban park without boundaries

Capitol experience – visit two capitol buildings – one built in 1777, one in 1933
Living History: “Spirits of the Green historically attired characters throughout the area mingle with and inform the tourists

The First State Heritage Park at Dover is for Everyone:  American Heritage, Family fun, Variety of things to do and see, adventure for many -- lantern walks, cemetery tours, First Saturday events year-long. Within the invisible walls of this park without boundaries are many fascinating sites to explore such as:

She withstood the test of time and her specter looms large over Delaware’s criminal history.  She ignored the cries of the men, women, and children who were forced into her embrace.  She counted many lashes, witnessed many tears, and faded one day into the night.  However, her Legacy remains and she has but one name – Red Hannah.  Revisit her history and hear her stories in this program.

When the Declaration of Independence was read aloud from the site of the present day State House, there were seventeen enslaved African-Americans living in homes around The Green. However, their struggle for independence would last almost another 100 years.  Hear the forgotten stories of Dover’s African-Americans’ journey for liberty from colonial beginnings to the Civil War. Take a walk through time and hear the tales of the promise and struggle of the African-American’s quest for freedom.

Tories, Whigs, militia, and insurrection.  Dover was a hotbed of revolutionary and loyalist activity during the struggle for American Independence.  Meet on the Dover Green to revisit the Revolution.

May’s First Saturday coincides with Old Dover Days. Held annually for nearly 75 years throughout the Historic District of Dover and surrounded by Colonial and Victorian buildings, Old Dover Days celebrates the history of the Capital of the First State. History comes alive with maypole dancing, Colonial craft demonstrations, walking tours, a parade, craft fair, and much more.  While activities are spread throughout the city, most events take place on the Dover Green and at Legislative Mall.  In conjunction with Old Dover Days, the First State Heritage Park and its partner sites offer a variety of special programs and activities.

Legislative Hall, the seat of Delaware’s General Assembly since 1933, is the supreme lawmaking body in the state.  Tour the House and Senate Chambers and view the governor’s formal office as you learn about Delaware lawmaking, history, and symbols.

Tories, Whigs, militia, and insurrection.  Dover was a hotbed of revolutionary and loyalist activity during the struggle for American Independence.  Join them on the Dover Green to revisit the Revolution.

The First State Heritage Park recreates lost memories for visitors on May 5 from 1:00-4:00 p.m. when it recaptures the Dover Green of 1915. Stanley Steamers from the Auburn Heights Collection (the largest single collection of Stanley Steamers anywhere) will offer visitors rides around the Green in these beautiful, early-twentieth century automobiles powered by steam, not gasoline. Also setting the mood will be brass band and barbershop quartet music, croquet matches, and more.