Artificial Intelligence Interacts with and Learns from People on Social Networks

Zabaware unleashes artificial intelligence technology known as Ultra Hal on social network Twitter. Ultra Hal is a conversational system capable of understanding and interacting in the English language. Its intelligence stems from the collective wisdom of everybody who has interacted with the system as well as samplings of the 95,000,000+ daily messages posted on Twitter. 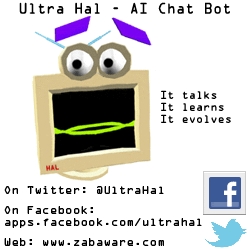 Erie, PA, February 14, 2011 --(PR.com)-- Zabaware is the maker of the award winning Ultra Hal software, artificial intelligence technology that won the “most human” computer of the year in the 17th annual Loebner Prize Competition for Artificial Intelligence (AI). Zabaware has recently integrated this technology on to Twitter, a popular social network where users post over 95,000,000 short messages to each other every day.

Zabaware is an Erie, Pennsylvania based company that specializes in artificial intelligence technology. The company's mission "giving your computer the power of thought" once considered a futuristic pipe dream is becoming a reality. It is one thing to talk to your computer it is quite another to have a conversation where you are exchanging information and the computer learns and utilizes the information in the future. Zabaware's Ultra Hal technology and its associated brain are currently doing just that. The software can give computers a personality using AI technology, speech recognition technology, and real-time animation. Like the noteworthy Jeopardy playing computer by IBM called Watson, Zabaware’s Ultra Hal is a natural language processing artificial intelligence. But whereas Watson is a question answering system geared at a game show, Ultra Hal’s AI is designed to engage human beings in conversation.

Ultra Hal is like an inquisitive child and is capable of learning new things from conversations based on complex natural language processing technology capable of statistically analyzing past conversations. The algorithms behind Ultra Hal have been in development for over 16 years and the recent explosion of social networking has given the system a huge conversational pool to base its knowledge on. The system analyzes hundreds of thousands of conversations publically available on Twitter each and every day. These conversations, along with conversations the system has with web visitors and users of its Facebook app, get assimilated into a large conversational database that becomes the base of knowledge for the artificial intelligence. Having a conversation with Ultra Hal is, in effect, like having a conversation with the “collective consciousness” of Twitter, Facebook, and user’s of Ultra Hal. Hal’s personality is a reflection of all of these people.

Twitter users can interact with Hal by posting a message to @UltraHal. Facebook users can find Hal on Facebook at http://apps.facebook.com/ultrahal or through Zabaware's homepage. In addition to being on these social networks, Zabaware’s Ultra Hal software is available for anyone to download and install on their Windows PC. Once installed, it can be used as a companion or entertainment product. Hal can discuss any topic and learns and evolves from conversations. Hal can also be used as a personal or office assistant. Hal can function as a personal information manager (PIM) and keep track of your appointments, contacts, and more. The artificial intelligence software is available for download at www.zabaware.com as a free 30-day trial, and costs $29.95 to use after that.