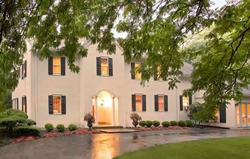 Auburn, NY, April 08, 2011 --(PR.com)-- A 6 night stay 10 Fitch Bed & Breakfast Inn will be appearing as a prize package on Wheel of Fortune for a third time on Wednesday April 13, 2011. The romantic Finger Lakes bed & breakfast will once again receive 10 seconds of national television exposure when video of the inn is shown on Wednesday night.

Travel website BedandBreakfast.com, the exclusive B&B prize provider for Wheel Of Fortune, first contacted innkeeper Cheryl Barber back in October 2009 to see if she would be interested in submitting a prize package for consideration. On April 5, 2010 Barber found out that the show they were featured on would be airing the following night. On February 7th, 2011 the inn’s prize package was offered on the show again but Barber did not know until after it had aired.

10 Fitch was purchased as a residence in 2004 and after renovations opened for business as an inn in 2005. The current owners, Cheryl & Rodney Barber, purchased the property and business in 2007 and immediately began marketing it as a luxurious, romantic, escape for adults.

If you would like more information about this topic, or to schedule an interview with Cheryl Barber, please call 315 255-0934 or e-mail Cheryl at innkeeper@10fitch.com
Contact
10 Fitch Bed & Breakfast Inn
Cheryl Barber
315 255 0934
http://www.10fitch.com