In celebration of National Poetry Month in the Untied States, Eyes Of The Poet Radio will play "blocks" of poetry during the month of April and will accept most new audio poetry submissions. 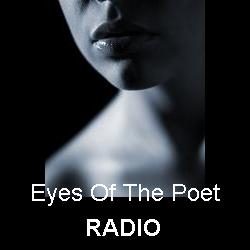 Denver, CO, March 26, 2007 --(PR.com)-- In celebration of National Poetry Month in the Untied States, Eyes Of The Poet Radio will play "blocks" of poetry during the month of April. Eyes Of The Poet Radio is an internet-based radio station that plays Ambient, World, and New Age music along with interviews, insight, and of course poetry. The station normally airs an audio poem, or other “Creative Audio“, between every four to six music tracks. The blocks of poetry will be aired each day during the month of April at 1p.m. Central Time.

In addition to well-known poets such as E.E. Cummings, Robert Frost, Pablo Neruda, and Sylvia Plath, Eyes Of The Poet Radio also plays poetry read by a wide variety of other poets. Submissions to the Internet radio station have included works pieced together from famous speeches, readings with electronically-altered voices, those who want to promote their new poetry CD, and many more who just want an opportunity to read their poetry for a world-wide audience. “At times it’s hard to distinguish between what is and what is not, poetry,” says Brian Douthit, owner of Eyes Of The Poet Radio. “That’s why I like to use the term, ‘Creative Audio’ now and then.”

During the month of April, Eyes Of The Poet Radio will take new audio poetry and Creative Audio submissions for broadcast. The new submissions will be aired during the block of time celebrating National Poetry Month. “Normally, my only concerns about new submissions are the quality of recording and that they’re in somewhat decent taste,” says Douthit. “For National Poetry Month, I’m willing to stretch the limits a little so that many more poets will have the opportunity to be heard. Hopefully, the station‘s listeners will enjoy these blocks of poetry and it will give us all the opportunity to hear some great new poetry.” Information about submitting new poetry can be found at the station’s Website: http://www.perfectlysaid.com/radio.html

Brian Douthit is the author of the poetry book, “Perfectly Said: when words become art” and co-edited the anthology, “Eyes Of The Poet: Love and Passion in Lasting Splendor.” He has written book reviews for ForeWord Magazine and writes book and music reviews independently. He owns and operates the Internet radio station, Eyes Of The Poet Radio. His Website and radio station can be found at http://www.perfectlysaid.com