SinkholeReport.com: The Ugly, the Beautiful, and the Interesting About Sinkholes

We know and fear sinkholes for their destructive nature. They have swallowed entire buildings and homes. To ancient civilizations, sinkholes represented windows into the mythical underground. Some sinkholes have become lakes and cave openings that are enjoyed by outdoor sports fanatics. Sinkhole.com is an online repository that recognizes the ugly, the beautiful, and the interesting about sinkholes. 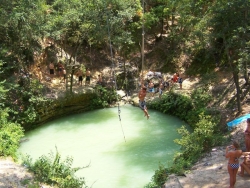 Tampa, FL, January 04, 2012 --(PR.com)-- Sinkholes are the result of erosion of the underground bedrock that ultimately collapses into a typically circular cavity deep into the ground. Most of us know sinkholes for their ugly side, and for the destruction they cause to public and private property. The impressive images of the damage caused in Guatemala City by a giant sinkhole that opened in 2010 went around the world. In the United States, the States with the most sinkholes are Florida, Texas, Alabama, Missouri, Kentucky, Tennessee, and Pennsylvania. According to the Office of Insurance Regulation of the State of Florida, sinkhole monetary damage to private property in Florida between 2006 and 2010 was about $1.4 Billion.

Sinkholes have been modifying the landscape long before humans inhabited the land. Many ancient sinkholes have been filled with water and are now beautiful fresh water lakes that are enjoyed by many. This is the case of the many sinkholes in the Yucatan peninsula in Mexico that were revered by the ancient Mayans, and are now touristic attractions. Other sinkholes expose underground aquifers and networks of caves to human curiosity. Extreme sports such as cave rope climbing and cave diving are common in many sinkholes.

Some very interesting sinkholes that occurred in prehistoric times act as time capsules. They became pits that trapped many prehistoric animals. These now extinct animals transformed into fossils, which are of anthropological interest. Fossils of prehistoric animal species extinct for millions of years have been found in sinkholes around the world. Among the findings are fossilized shark teeth, ancient mammal skeletons of rhinos and bears, and ancient shells. Some fresh water sinkholes in the deserts of Nevada harbor life forms like the Devil’s Hole Pupfish that are uniquely adapted to living in the sinkhole’s microenvironment.

SinkholeReport.com is a new online repository dedicated to the exploration and understanding of the sometimes magical and sometimes destructive nature of the sinkhole phenomena. The beautiful and touristic, the ugly and destructive, and the historic and interesting aspects of sinkholes are represented and cataloged in this unique database.