Power Equipment Direct - an online power equipment retailer - continues its rapid growth with the addition of a new distribution center in Bolingbrook, IL. 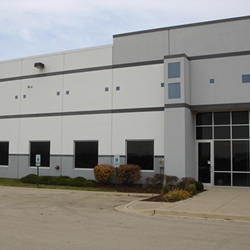 The new facility in Bolingbrook, Ill. is four times larger than the old warehouse in Romeoville, Ill. Since it was specially designed to optimize space, the PEDplex can store nearly 8 times as much inventory.

Since most Power Equipment Direct employees work from home, Hoch insisted on creating a relaxed work environment. This was achieved by selecting a welcoming natural color scheme and furniture that blends with the company's existing prairie-like outdoor setting.

“We wanted to create a space that employees would enjoy coming to, even on a cloudy, winter day,” said Hoch.

The new PEDplex is located at:

Power Equipment Direct also acknowledges the following companies that assisted with the construction: