"Nevermore" with a Score: Pipe Organ and Edgar Allan Poe’s "The Raven" 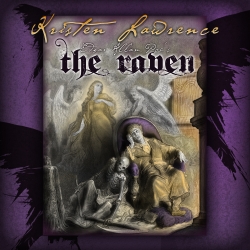 Classically trained organist Kristen Lawrence has tapped on Poe’s chamber door, writing a score to “Nevermore” in her new CD release, Edgar Allan Poe’s “The Raven.” Set amidst pipe organ and strings, her ethereal soprano voice carries all 18 verses of the famous poem, as if sung by the ghost of Lenore.

Quite the appropriate artist to set “The Raven” to music, Kristen has developed a reputation as a “Halloween specialist.” Stephen Fortner, executive editor of Keyboard Magazine, says: “If the Halloween Town of Tim Burton’s The Nightmare Before Christmas had a resident keyboardist, it would be Kristen Lawrence.”

A love of autumn and interest in the history of Halloween inspired Kristen to write and arrange music she calls her Halloween Carols™. Her albums include: Arachnitect (2008), A Broom With A View (2009), Vampire Empire (2009), and now Edgar Allan Poe’s “The Raven” (2012).

Not only is Kristen’s setting beautiful, it is a study and analysis of Poe’s famous poem. She has written an essay – “A Musical Setting of Edgar Allan Poe’s ‘The Raven’” – describing how she crafted her composition as a series of vignettes with themes woven throughout (available on her website). Hers is a work that will be enjoyed by serious Poe scholars as well as casual Poe appreciators… and, of course, lovers of Halloween and the macabre. Raving “Raven” reviews are already coming in from fans around the world.

Quoth Kristen, “People love Poe. People love Halloween. People want pretty music to add richness to what they love.” And this CD would win Edgar’s approval, for he said, “…there can be little doubt that in the union of Poetry with Music in its popular sense, we shall find the widest field for the Poetic development.”

He also said, “Music… is so vitally important an adjunct, that he is simply silly who declines its assistance…”

Do you think Edgar is listening?