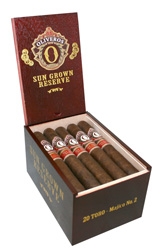 It was named one of the best 2011 IPCPR releases by many of the cigar bloggers, and was included in the list Top Cigars of 2011 by many of the online cigars reviewers.

Boutique Blends Cigars was introduced by Oliveros Cigars early this year, to concentrate on the production and distribution of small batch cigars made from hard to find and limited availability premium tobaccos.

The Oliveros SGR is a Medium Bodied cigar, made in Estelí, Nicaragua and is made exclusively with Nicaraguan premium tobaccos.

“We want to bring the cigar enthusiasts new exiting blends made in small batches, at an every day cigar price,” said Hank Bischoff, Vice President of Boutique Blends Cigars and Oliveros Cigars.