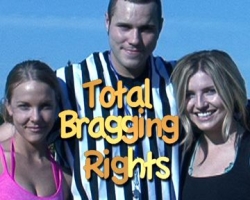 Each episode of “Total Bragging Rights” features a new set of best friends who compete against one another in competitive, contestant-generated challenges. After selecting six events each, contestants eliminate two of their friend’s choices, bid on the remaining eight events, and then play them out. Additionally, there are several bonus rounds and the person who has garnered the most points at the end of each episode, wins “Total Bragging Rights.” During each episode, contestants also discuss their background and offer amusing anecdotes about their lives and friendship. After ten episodes, fans will vote for their favorite contestants and the top two teams will compete in the season finale.

The series premiere featured Morgan Roen and Cortney Martinez, two MMA (Mixed Martial Arts) Ring girls who also model on the side. Their mutual friend, Hueston Hancock, was enlisted to referee the challenges. After arm wrestling for the right to go first, the two friends competed in a variety of events including skateboarding, tug-o-war, sit ups, running jump rope, a speed makeup challenge, and swimming. After ten challenges, Cortney narrowly defeated Morgan in their friendly battle.

Next episode features Derek Williams, an aspiring rapper, versus his friend Justin Sanga, an aspiring producer. Their mutual friend, Brian Jones, takes on the refereeing duties. Both friends are from Suisun, California, and will compete in a number of challenges including basketball, wing eating, 40-yard dash, football, wall ball, and high jump.

Each week a new segment of “Total Bragging Rights” is posted online at www.youtube.com/totallybragging. Friends interested in becoming contestants should send an email inquiry to tbrcontestants@gmail.com (Both contestants must be over 18 and currently living in the San Francisco Bay Area).