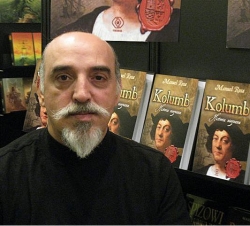 Chicago, IL, September 05, 2012 --(PR.com)-- The Balzekas Museum of Lithuanian Culture in Chicago hosts a sensational lecture this Friday, September 7, 2012, at 7:00 PM, presented by Manuel Rosa, (Historian, Author and Founding Member of Association Cristovao Colon) which details how Christopher Columbus was not the Italian son of a Genoese wool-weaver but a nobleman of royal blood.

The new findings are published in Rosa's latest book,“KOLUMB. Historia Nieznana,” (COLUMBUS. Unknown History) which is turning into a bestseller in Poland. The results of his research are flabbergasting!

The turning point for publicizing his findings was an article published on November 28, 2010 in the British "Daily Telegraph" (the same which reported the discovery of Troy by Heinrich Schliemann!) where its correspondent Fiona Govan reported from Madrid about Manuel Rosa's book Colon: La Historia Nunca Contada published in Spain.

The news quickly spread all over the globe. "Mamma Mia!" exclaimed New York Daily News Staff Writers Corky Siemaszko and Christine Boyle, "New research suggests the man credited with discovering America was actually the son of exiled Polish King (from the Lithuanian Jagiellonian dynasty) Vladislau III - and not the son of a humble craftsman from Genoa... the Genoese wool-weaver is a fable."

Mr. Rosa has published four foreign language books on Columbus and has succeeded in proving many falsehoods that had been accepted up to now as correct parts of the Columbus narrative. His new Columbus biography contains a large amount of facts that expose and explain many of Coumbus' mysteries. Rather than an ignorant, lost and confused sailor, Christopher Columbus is now seen as a highly trained nobleman who lived a life of “treachery, treason, murder, lies, intrigue, assassinations, fraud, and deception” as a secret agent for an enemy of the crown of Spain.

Furthermore, by carefully combing through the facts of history, it was evident that Columbus was using a false identity in Spain. Now, after 21 years of scientific investigation, Mr. Rosa believes he knows why: Columbus was the son of an exiled king.

To learn more about Columbus, the Balzekas Museum of Lithuanian Culture has invited this longtime Columbus historian to come to Chicago and discuss the findings of his investigation this Friday September 7, in lecture titled: "The Secret Identity of Columbus: Peasant to Viceroy in 33 days."

The lecture is open to the general public. For more information visit www.balzekasmuseum.org/Pages/events/bmlc_christopher_columbus_manuel_rosa_lecture.html

Mr. Rosa, who is currently working with actor Christopher Siepietowski to turn his book into a movie script, will travel to Chicago accompanied by Mr. Eric Steele, co-author of “The Columbus Mystery Revealed.”
Contact
Association Cristovao Colon
Margarita Viniatskaya
919-289-0030