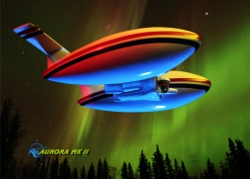 St. George, UT, October 08, 2012 --(PR.com)-- The Falcon Project proposes to conduct an extensive aerial search for an unrecognized North American primate, a.k.a. sasquatch or Bigfoot, by means of an helium-filled airship, upon which a platform supporting thermal-imaging and high resolution wireless videography equipment is mounted. The Aurora Mk II airship offers major advantages over similar applications with helicopter or fixed-wing aircraft platforms, foremost, stealth and maneuverability. The former permits approach and observation with minimal or no disturbance of the subject’s natural behavior. The latter is critical for surveying in areas of dense stands of forest where a sustained vertical perspective is essential for locating animals on the forest floor.

The unmanned 45' dual airship is equipped with a proprietary propulsion system that can carry the airship at speeds of 35-45 mph and maneuver with the degree of precision necessary to track a fast-moving animal. The construction, instrument integration, and flight training is being provided by Remote Aerial Tripods Inc. of Canada, with Stephen Barkley as lead designer of the Aurora Mk II. The airship, gyro-stabilized camera mount, and ground operations equipment have been designed specifically for the requirements of this task. The sleek, quiet, never-before-used technology eliminates the noise produced by conventional aircraft and on the ground investigators, allowing stealthy approach to wary reclusive species. The challenge of locating a solitary, nocturnal far-ranging, intelligent primate is demonstrated by the dearth of definitive photographic evidence. The Falcon Project offers a novel approach employing the latest technologies.

The research is to be coordinated through Idaho State University, with Dr. Jeff Meldrum, professor of anatomy & anthropology, acting as principal investigator. Meldrum has been probing the question of sasquatch’s existence for nearly 17 years, ever since examining a line of inexplicable 15-inch bipedal footprints in southeastern Washington. Meldrum is author of one of the most authoritative treatments of the subject, Sasquatch: Legend Meets Science. He has published a number of scientific papers examining the footprint evidence. He now edits an on-line refereed journal, The Relict Hominoid Inquiry (www.isu.edu/rhi) examining the global phenomenon of relict “wildmen”. “Even if definitive DNA sequence data point to the existence of a novel species,” states Meldrum, “it will not suddenly become easy to study such a rare and elusive primate in the field. That’s where the Falcon Project comes in.” Aerial reconnaissance holds the greatest potential for locating and observing the range and the behavior of the sasquatch.

William Barnes (williamallenbarnes@yahoo.com; 435-230-0351) is the project founder and manager, with over 25 years experience operating his own businesses, including gold dredging and marketing. Managing businesses with attention to detail, and getting the job done with the necessary resources, has given him the ability to create successful projects. Barnes had an encounter with a sasquatch in 1997, and is motivated by the challenge of bringing definitive film evidence before the scientific community for the purpose of finally resolving the mystery of sasquatch. Upon discovery, Barnes would like the Falcon Project to provide the basis for further study of the species’ behavior in its natural habitat and for securing their protection in the future.

Jason Valenti (jason@sasquatchresearch.net; 360-393-7732), co-founder of the Falcon Project, got involved in the investigation after his own personal sighting of a sasquatch in the Apalachicola National Forest, FL, in 1996. He has been out in the field on many occasions to search for evidence. He organized and hosted the 2005 Sasquatch Research Conference in Bellingham, WA. His background in multi-media solutions, electronics, service and maintenance of bio-medical equipment will be an asset to the project.

The Aurora will be deployed in selected areas of appropriate habitat where reports suggest sasquatch may range. The specifically built gyro-stabilized camera mount will house state of the art equipment that can view and film in infrared, thermal imaging and High Definition. The camera is the highest resolution (1024 x 768 pixel) uncooled, long wave 7-14 um and 17 micron pixel pitch system in the world today, except for classified U.S. military equipment.

Peak emittance from the human body is around 10 um and so this camera will provide the best possible resolution. ICI IR Flash software used with the camera allows image enhancement to 12 Mega Pixels which is better than any uncooled thermal imaging camera in existence today. In other words you will be able to literally print a 12 Mega Pixel image with a Thermal/Infrared Camera by using the proprietary ICI IR Flash Software. This is unheard of in the entire infrared camera manufacturing industry. The FOV (Field Of View) lens used will be a 44 mm x 176 mm optic, f 1.2. To our knowledge no company has used a telephoto lens of this size with an uncooled 1024 x 768 camera for such a project other than possibly the U.S. Defense. Putting an optic on this particular camera will be a first for ICI as it is the newest uncooled IR camera on the market today and not even offered to the public at this time.

Funding and tax deductible donations for ongoing operations of the Falcon Project will be handled through the ISU Foundation, to the attention of Janet Schubert, Development Officer for the College of Science and Engineering. For further information contact Dr. Meldrum (meldd@isu.edu; 208-282-4379).
Contact
The Falcon Project
William Barnes
435-230-0351
the-falconproject.com 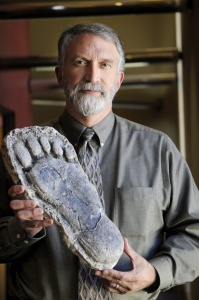 Professor of Anatomy and Anthropology at Idaho State University Artist rendition of what the creatures possibly look like based on collected data and eyewitness reports. 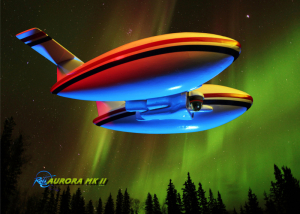 Airship used in the Falcon Project to search for sasquatch