Laura Ainsworth's critically-hailed debut album finally introduces the world to the singer behind a voice that's been heard on radio worldwide for years. 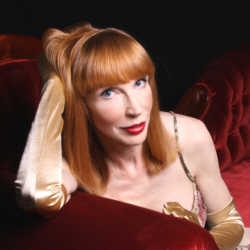 Dallas, TX, January 04, 2013 --(PR.com)-- When Dallas-based singer Laura Ainsworth released her debut album on Eclectus Records, “Keep It To Yourself” (CDBaby.com), critics asked, “Where has she been hiding?!” She laughs, “I’ve been all over the radio for years. It’s just that nobody ever knew my name until now.”

Ms Ainsworth has been a behind-the-scenes radio star since the 1990s, creating topical humor through her own service, the Comedy Wire, and other syndicators. Her song parodies such as “Santa Baby (Help Me Through Recession Tonight)” were heard worldwide and at www.lauraainsworth.com. Recently, longtime fan Mike Huckabee signed her to contribute to both of his Cumulus Media radio shows, heard on a combined 700 stations. He became the first to actually credit her on the air.

But what few of her clients knew is that while Ms. Ainsworth was anonymously making people laugh on the radio, she had a serious second career in live music. In glittery gowns and long satin gloves, the tall, sexy redhead joins forces with some of the top jazz musicians in the Southwest to revive the music she grew up loving as the daughter of legendary big band musician, the late Billy Ainsworth.

Ms. Ainsworth recalls, “My dad was such a prodigy, at age 17, he was playing sax and clarinet for Tommy Dorsey and backing Frank Sinatra. Much later on, I grew up watching him accompany my idols, like Ella Fitzgerald, Tony Bennett and Mel Torme. I remember thinking, ‘That’s what I want to do!’ Of course, I didn’t realize how rare it was for anybody to be doing that anymore.” But with the release of “Keep It To Yourself,” her dream of carrying on the family musical tradition was finally realized.

On her debut, dedicated to her dad and produced by Texas jazz piano icon Brian Piper, Ms Ainsworth puts her own new twist on standards and obscurities from the ‘20’s onward. Her trademark humor is evident in the title track, an Amy Rigby-penned instant classic about a woman seducing her boyfriend into making her ex disappear, and the swinging “That’s the Kind of Guy I Dream Of (You Should See The Kind That I Get),” last heard as a 1952 Betty Hutton B-side. But it’s the ballads that bowled over critics.

Ms. Ainsworth’s retro style is untouched by the “American Idol” oversinging and studio tweaking so common to modern recording. She combines pure emotion with perfect pitch and effortless control, and has the rare ability to hold, bend and caress a note seemingly without end. Reviewers raved about her “satiny, impossibly old-fashioned voice” that calls to mind such past greats as Ella, Keely Smith and Julie London, and declared her debut “sublime,” “magic” and “a unique gem.”

But even she was stunned when her album, with little publicity or advertising, hit the JazzWeek Top Radio Airplay chart alongside Stanley Clarke and Lee Ritenour. The capper came when the respected Jazz Inside magazine devoted a rave lead review in its annual “Vocalists” issue to her. Writer Eric Harabadian gushed, "You can keep all those pop divas. The only one for me is Laura Ainsworth...(She) has beauty, brains, sophistication and comic timing that make her the total performance package.”

It’s all a bit overwhelming for a performer who had grown accustomed to working in the shadows. But Ms. Ainsworth is finally enjoying being in the spotlight. It’s a delightfully new experience for her just to be recognized or asked to autograph a CD.

Best of all, the success of her debut has allowed her to start recording a follow-up, “Necessary Evil,” named for her cover of an obscure Ella Fitzgerald-Louis Armstrong song. But among her usual musicological excavations, one track is brand new. It’s a clever tribute to her favorite composer, Johnny Mercer, on which she’s accompanied by a full big band composed of 20 of Dallas’ finest jazz musicians.

Ms. Ainsworth says, “I’d like to think my dad was looking down on that session and smiling. Even after rock, rap and hip-hop, the sophisticated music he loved is still alive. And I’m thrilled to help keep it growing.”
Contact
Eclectus Records
Charles Reeder
972-263-3381
lauraainsworth.com