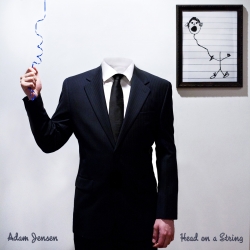 Boston, MA, January 29, 2013 --(PR.com)-- It's been almost a year since his last release as "Mission Hill," but the much anticipated debut EP from Boston rocker Adam Jensen, is finally here. All five (5) songs on the record were written by Jensen, except “Lost Without You” which he co-wrote with international superstar Rob Thomas (Matchbox 20) and Nashville radio DJ, Dave Harris. "Lost Without You" was produced by Grammy Award nominee Aaron Johnson (The Fray).

Adam teamed up with the former Boston Music Award "Producer of the Year" winner, Benny Grotto, on “Cannonball” and “Redemption Man” and Boston-based producer Taylor Barefoot on “Dead Man Walking."

The EP is now available on iTunes, Amazon and Spotify.

Who is Adam Jensen?

Adam Jensen is an award-winning recording artist, songwriter and producer from Boston, MA. From an 8-year-old classically trained pianist, to a 15 year old playing his first gig on the piers in Boston to a 25 year old rocking out at Gillette Stadium with Bon Jovi, Jensen has always known music was his path to staying out of trouble.

Formerly known as "Mission Hill," Jensen has made a name for himself with a commitment to his songwriting craft and relentless gigging which includes dates all over the world and opening for artists such as Kid Rock, Train, Tim Reynolds, Third Eye Blind and many more.

Jensen was previously signed to Toucan Cove (Universal Records) as “Mission Hill,” and received the “Vocalist of the Year” award from the LA Music Awards.