The gods have come to Red Flush’s newest mobile software platform, and representatives are proud to report that Thunderstruck II has hit Android gamers in a big way. 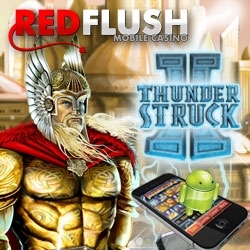 It is easy to understand how Thunderstruck II came to be the most popular Microgaming game of all time, with a number of special features which set it apart. These include a Great Hall of Spins accessed with three appearances of Thor’s mighty thunder-wielding hammer, Mjölnir, on the reels and Magic Wilds, Raven Wilds and many more.

This is the first time the game has been available on a mobile platform in Red Flush Casino history.

“It is exciting news indeed that Thunderstruck II has joined the ranks of the many online slots that have made the jump to enriching mobile gamers’ lives as well. This marks the first achievement in a whole new era of bringing one of Red Flush’s best-loved games to a wider and wider audience,” said Red Flush promotions manager Alex Roberts on the online casino UK audience for Thunderstruck II.

With its release on Red Flush’s Android platform, Thunderstruck II was given a makeover to make it work specifically on Android devices. The game’s graphics, sound and animation are sharper and more sophisticated than ever before, as befitting a mobile platform which can handle more convincing graphics, sound and animation than those gone before. The game also works with Android devices’ specific ‘touch, swipe, tap’ touch screen interfaces.