Upcoming leaderboard tournament La Fiesta Grande opens registrations at Casino La Vida next week – and it is set to be the party of the season! 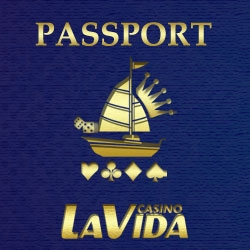 Toronto, Canada, July 11, 2013 --(PR.com)-- The reality of summer is rarely about flitting across the ocean on a luxurious cruise going from fabulous party to fabulous party, yet that is exactly what the past month has been for Casino La Vida patrons. With their innovative new Passport to Paradise campaign, the online casino has transformed all its members into jet-setting party animals taking Europe by storm.

“Casino La Vida has put a lot of time and effort into the Passport to Paradise promotion, our most extravagant promotion ever, and it has been a phenomenal success so far,” said promotions manager for the casino Victoria Lamonte.

Passport to Paradise takes the form of a virtual cruise across the Mediterranean for some of the hottest events in the world, including the Venice Film Festival in Italy and Bastille Day in France. From the beginning of June to the end of August, La Vida patrons are being treated to several different promotions set in different exotic locations.

Now halfway through the 8 promotions, Casino La Vida is ready to unveil the most extravagant leg of the entire Passport to Paradise journey – La Fiesta Grande.

Lamonte explained: “La Fiesta Grande is a free-entry tournament with three qualifying rounds and an elaborate final, themed around the delights of summer. It is a leaderboard tournament set in the middle of the Passport to Paradise promotion, rewarding players with better prizes the more they play – so the whole tournament is geared towards a summery atmosphere of fun!”

Some of the things to look forward to with La Fiesta Grande are prizes worth $50 000, a year’s supply of Champagne and the fifth of eight Passport to Paradise stamps - which will be awarded to all La Fiesta Grande finalists. Those with five Passport to Paradise stamps by the end of the tournament will be entered into a draw during which a VIP Cruise for 2 worth $15,000 will be up for grabs.

La Fiesta Grande begins on 29 July 2013, with registrations for the tournament opening on 18 July 2013 next week. Those who wish to participate can do so by registering an account with Casino La Vida and claiming their $/£/€ 3000 free in sign-up bonuses.
Contact
Red Returns
Sean Deville
1-888-885-4517