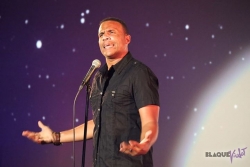 Hollywood, CA, August 26, 2013 --(PR.com)-- 17 year veteran comedian David A Arnold has been tapped to write for Martin Lawrence and Kelsey Grammer's new sitcom on The FX network. FX secured a 10/90 deal so that if the still untitled multi-camera comedy, from Lionsgate Television and Debmar-Mercury, hits a certain ratings threshold within its initial straight-to-series 10 episode run, 90 more will be ordered automatically.

No stranger to television, Arnold has written for countless television shows including: Raising Whitley (OWN), The Rickey Smiley Show (TV One), Tyler Perry’s House of Payne (TBS), Tyler Perry’s Meet the Browns (TBS), Tony Rock Project (My Network TV) and more. The FX series stars Kelsey Grammer and Martin Lawrence as Chicago lawyers from vastly different backgrounds who unexpectedly meet in court on the worst day of their lives. Brought together by fate and greed, they develop a partnership and friendship, forcing each other to find the balance between the ethical and unscrupulous in their professional and personal lives. Having worked with comedy greats throughout his career, Arnold is excited to bring his edgy writing style to accentuate what the seasoned pros will be bringing to the screen. “The best part about receiving an opportunity like this is knowing that you’re ready. I’m looking forward to contributing to this talented team." – David A. Arnold

David A. Arnold has been making audiences laugh on stage and behind the pen for years and is currently in talks with New Wave Ent. and Netflix for his own one hour stand-up comedy special which promises to deliver countless WTH moments thanks to his unfiltered, brand of comedy.

Not familiar with David A. Arnold’s stand up? Click the link below to view a 90 second clip of funny!