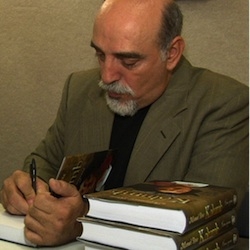 New York, NY, September 26, 2013 --(PR.com)-- In a twist that could rile the feathers of Italian-Americans everywhere, researcher claims Columbus was not Italian after all, but of Polish extraction.

The controversial subject will be presented by Manuel Rosa, historian and author who has spent the last 22 years investigating and examining the facts concerning the life of Christopher Columbus and his discovery of America on October 12, 1492. Utilizing a non-biased scientific approach that has taken him to Portugal, Spain, Dominican Republic, Poland and many places in-between in a relentless pursuit of the truth, Mr. Rosa unearthed unknown facts and new information about Christopher Columbus that resulted in the publishing of his first book in 2006, “O Mistério Colombo Revelado” in Portugal, followed by “COLÓN. La Historia nunca contada” in Spain. In May 2012, “KOLUMB. Historia Nieznana” (COLUMBUS. Unknown History) became a bestseller in Poland and “KOLUMBAS. Atskleistoji istorija” will be published in Lithuania, February 2014.

By juxtaposing the documentation he found in the different countries, Mr. Rosa claims that it is impossible to fit the new information into the currently accepted Italian narrative. One blatantly obvious conundrum is that the supposedly “Italian” Christopher Columbus did not write a single letter of correspondence in Italian, not even to his brothers who lived with him in Spain. Another sheer impossibility is that, if Christopher Columbus had been the peasant wool-weaver of the history books, he could never have married into the restrictive nobility of Portugal in 1479. The new evidence shows that Columbus’s Portuguese father-in-law was of such nobility that he was uncle to the king’s mistress and Columbus’s brother-in-law was the king’s bodyguard, plus Columbus’s wife was so elite that she was one of the twelve "Donas" of the Commandery of All-Saints from the influential Military Order of Santiago, requiring the king’s permission to marry. Furthermore, Columbus’s son married the King of Spain’s cousin.

This clear evidence shows that what the schoolbooks had been teaching was an impossible “rags-to-riches” fairytale between a peasant and a noble that would rival many Walt Disney films. In short, academics are now forced to acknowledge that Christopher Columbus was no simple wool-weaver's son from Genoa but a very well connected nobleman. Miltiades Varvounis, distinguished Greek-Polish historian, researcher and critically acclaimed author declared, “KOLUMB. Historia Nieznana is a magnum opus … and maybe the time has come for the discoverer’s life to be finally rewritten. - Source Lithuanian Heritage Magazine, (January/February 2913).

Another little publicized fact is that the discoverer’s true name was not Christopher Columbus, this name, or better yet, Cristóbal Colón in Spanish, was the discoverer’s assumed identity in Spain, thus Mr. Rosa fittingly titles his lecture: “The Secret Identity of Columbus: Peasant to Viceroy in 33 Days.”

According to Mr. Rosa’s provocative new theory, far from a peasant, Cristóbal Colón was actuality born Prince Segismundo Henriques de Sá Colonna, the son of a Portuguese high-noblewoman and the mysterious Henrique Alemao, the false name utilized by none other than Wladyslaw III, the former king of Poland who disappeared at the Battle of Varna in 1444 and went to live incognito on the Portuguese Island of Madeira.

Entrance is Free and Open to the Public.

About Manuel Rosa:
Manuel Rosa is a Portuguese-American historian and author who emigrated from the Azores to the Boston area in 1973 with his parents. In his early professional life he was employed as a graphic artist working on books and national magazines including The Atlantic Monthly and Boston Magazine and currently works at Duke University. Fluent in several languages, he participated in the DNA studies of the bones of Columbus and he is also a recipient of the Boston Globe’s Art Merit Award and the Lockheed Martin Lightning Award. He is working to find a US publisher for the English version of the book.

"Another nutty conspiracy theory! That’s what I first supposed. I now believe that Christopher Columbus is guilty of a huge fraud carried out over two decades." - James T. McDonough, Jr., Ph.D. Professor for 31 years at St. Joseph’s University.