From November 30 to January 4, 2014, The Roque Gameiro House, in Amadora, Lisbon, hosts the exhibition “International Surrealism Now,” conceptualized by Santiago Ribeiro. The event features artworks from 29 countries. The opening is scheduled for 4pm, 30th of November. 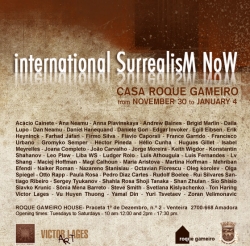 Amadora, Portugal, November 16, 2013 --(PR.com)-- International Surrealism Now” began in Coimbra, in 2010, when Santiago Ribeiro conceived a major exhibition which was organized by the Bissaya Barreto Foundation. The event was presented in Conímbriga, celebrating the 50th anniversary of the Conimbriga Monographic Museum (second most visited museum in Portugal) and, subsequently, went to Paris, with the support of the GAPP – Portugal Presente Art Gallery and Liba WS, and once again organized by the Bissaya Barreto Foundation and Santiago Ribeiro, and was later presented in Madrid, with the support of Yamal Din.

Santiago Ribeiro requested the partnership of artist Victor Lages (who developed the project ” Utopia of Fantastic Art “), for the purpose of organizing exhibitions in the Lisbon Region, which has already happened at the House of Culture in Setúbal, in Lisbon’s city center, at the Gallery of Caixa de Crédito Agrícola, at the House of Culture Jaime Lobo e Silva, in Ericeira, more recently at Fellini Gallery, in Berlin, with the exhibition entitled “21st Century Portuguese Surrealism” and will soon occur at the Roque Gameiro House, in Amadora.

The exhibition consists of a variety of artworks, created through different techniques and media, such as drawings, paintings, photography, digital art and sculpture.

Among the participating artists, Isabel Meyrelles stands out for her relevancy in the world history of surrealism. She was born in Matosinhos in 1929, studied sculpture with Masters Américo Gomes and António Duarte. Settled in Paris in 1950, where she continued her studies at the Université René Descartes – Paris V-Sorbonne and l’École Nationale Supérieure des Beaux-Arts. In 1952 she studied sculpture with Master Zadkine at the “Grande-Chaumière.” She Integrates the surrealist movement, which she considers immortal and closely follows the French surrealism (whose founder was André Breton, with whom she coexisted) and also the work done by her friends, such as Triston Tzara. She also gives special attention to the Portuguese surrealist movement, being friends with António Pedro, O’Neill, Cesariny, Cruzeiro Seixas, among others, and also with Eugénio de Andrade and Natália Correia. Poetry is also an integral part of her life. Isabel Meyrelles was awarded Commander of the Order of Saint James of the Sword, by the President of the Portuguese Republic. Daniel Hanequand, French surrealist recently deceased, is another important name in the field of international surrealism, whose unique artworks are a great contribution for the exhibition’s singular importance. Russian world-renowned artists such as Yuri Tsevtaev, Sergey Tyukanov and Oleg Korolev constitute a link with events in the Russian Federation. Should also be noted the participation of the North American artist Shahla Rosa, of a great name of the 21st century surrealism, as well as the participation of Austrian artist Otto Rapp, who has been carrying out the “Visionary Art” project with exceptional commitment.

Built in Amadora, from 1898 to 1901, as the house of watercolour painter Alfredo Roque Gameiro and his family. It is now opened to the public and some of its living rooms, profusely decorated with tiles by Bordalo Pinheiro, can be visited and admired. The Roque Gameiro House is one of the most notable historical and cultural heritage references in the municipality of Amadora.