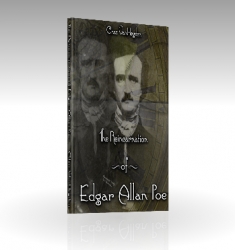 Nashville, TN, June 21, 2014 --(PR.com)-- Velvet Gloves Publishing is adding to its stock of published works a new non-fiction title: "The Reincarnation of Edgar Allan Poe." Following its tradition of paranormal topics its publication takes a new direction, non-fiction. The work will satisfy general readers as well as scholars.

Here’s what noted biographer Kenneth E. Silverman has to say about TREAP:
“I enjoyed very much your lively quotes about reincarnation from Wordsworth, London, Patton, etc. They make an effective opening... I’m on surer ground in reading about Franklin and Poe, and found very enlightening the lines you draw between them: their work for magazines and newspapers; their mutual insistence on avoiding mere ornamentation; their swimming (!); their contempt for plagiarism; their mutual habitation of Boston, New York, and Philadelphia [sic]; their joint opposition to slavery; the popularity they achieved as American writers. Hadn’t thought of benevolence in Poe, but you are surely right in speaking of his devotion to his family, and also in asserting his difference from Franklin due to his traumatic childhood I’m less sure about the claim that Poe revered England, and was like Franklin well versed in contemporary scientific thought--or that there was some musical connection between them. Thanks, by the way, for your thumbs-up mention of my biography. Wishing you best of luck with the monograph and the book, Regards,"
- Kenneth E. Silverman (Pulitzer-Prize Winning Biographer)

As the jacket states, “When E. A. Poe left this Earth his work was not done. Many will be heartened to know that he returned in an even more celebrated literary figure, and got paid (this time) handsomely for his efforts.”

Previously from VG Publishing and reviewed positively is the "TRILOGY: Confessions of an Alien Marooned on Earth."

Available on Amazon.com in late June in paperback and hard cover.