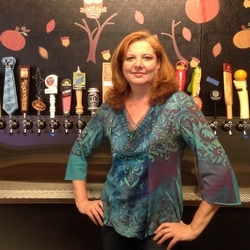 Stockbridge, GA, October 27, 2014 --(PR.com)-- Barley and Vine Growlers is pleased to announce their new Beer and Wine Department Manager, Robbie Jo Kelly. As Manager, she manages the purchases of nearly 400 bottled beers and the 27-tap growler bar, in addition to their growing wine department selections.

"I'm excited to support the growing craft beer culture in Henry County," says Robbie. "I love going to local events like the Geranium Festival to connect with wine, cider, and craft beer enthusiasts in the area."

Robbie began at Barley and Vine two years ago working as a part-time employee. During that time, Robbie learned wine making, cider making and home brewing. She has also taught wine making and cheese making classes.

For the month of October, Robbie began an initiative to help raise money for National Breast Cancer Foundation, Inc. in which 50 cents from each 64 ounce growler fill goes to the foundation. So far, over $170 has been raised through the growler bar.

To check out what's on tap and what's in bottles in store at 1445 Rock Quarry Road in Stockbridge, Georgia or online at barleyandvinegrowlers.com

About Barley and Vine
Barley and Vine opened in 2009 by Dan and Kat Vallish as a home brew and wine making supply shop. In 2012 with the buzz of growler bars, they began carrying bottled beer and soon tapped 9 beers which quickly turned into 27 taps. Barley and Vine is the place for knowledge and expertise on brewing, wine making, cheese making, craft beer, wine, and vinegar.
Contact
Barley and Vine
Dan Vallish
770-507-5998
barleynvine.com