Director John Putch can be described in many words. Fake is not one of them. Genuine. Original. Efficient. Honest. Focused. These qualities capture the Chambersburg, PA, native's character, along with his unwavering dedication to deliver his best with every project he undertakes. 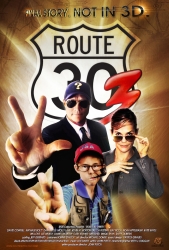 Los Angeles, CA, November 17, 2014 --(PR.com)-- Though Putch now lives and works in Hollywood, he focuses his energy on creating independent masterpieces — heartfelt productions that reflect the values instilled by his parents from a young age.

The third installment of the Route 30 trilogy is set to have its Los Angeles premiere on December 10th 8PM at the Laemmle Noho 7 movie theater at 5240 Lankershim Blvd. North Hollywood, CA 91601

"The Route 30 trilogy is very personal to me," Putch said. "All films were shot in my hometown area of Chambersburg and Gettysburg in south-central Pennsylvania. I use a combination of local actors, and New York and LA-based actors. The story lines and characters are drawn from experiences I had or types of people I grew up with. It is 100 percent fiction, except when Mister Ed appears as himself. When I make these movies, I have a strict, no frills set of guidelines that is adhered to. The message while making the film is always the same: If it feels like work then we are doing something wrong.

"With that in mind, the process of making the film is ultimately the highlight. Having a film to share with others oddly becomes secondary. This might sound crazy to other folks making films, but I have been doing it so long, that the usual outcome bores the crap out of me and as a result, I am searching for something different. These films help me to stay creative and have fun in my chosen profession. I hope folks enjoy them as much as I do."

Putch said he appreciates the support these films have garnered from local audiences, the support he says makes his whole career worthwhile. Cast member Noah Applebaum said he loves the "Route 30" trilogy because the films find "inspiration in south-central Pennsylvania from locations and characters and stories that shaped Putch's life, and then seeing how he brought that to the screen, it's just amazing."

Details for the Los Angeles Premiere