The keynote speaker was Reverend Sarad A. Davenport, Director of the City of Promise, Charlottesville, VA. The City of Promise is a Department of Education Promise Neighborhood initiative designed to create a continuum of solutions with the potential to significantly improve the educational and developmental outcomes of children and youth. Davenport works with the children from Westhaven and the surrounding 10th and Page and Starr Hill neighborhoods.

The Citizen of the year award was received by James Hollins of Charlottesville, President of Burley Varsity Club. Hollins a former linebacker with the former Burley High School (“Burley”) football team started the Burly Varsity Club with friends in 2007, to instill pride and conduct research on all sports records, trophies, and photographs from 1951 to 1967, to restore artifacts for display at Burley Middle School, and to pay tribute to Burley’s former athletes and their achievements. Hollis is active with Zion Union Baptist Church, where he is on the usher board and serves on the Capital Improvement Project Team. He is vice present and past president of the Rose Hill Neighborhood Association, chairman of the VIA Heritage Association, and serves on the Piedmont Housing Board.

The Omega Man of the Year Award was received by James H. Barlow, Jr of Fluvanna County, Principal of Fluvanna County High School. Principal Barlow attended Virginia State College in Petersburg, VA where he received a Bachelor of Science degree in education. He earned his Master’s in Education from Lynchburg College, Lynchburg, VA. Principal Barlow has over 26 years in education where he has received numerous, education, community, and leadership awards. Barlow coached boys and girls high school basketball teams, and is a member of the National Association of Secondary Schools Principals, and chairman of the Jefferson District -Virginia High School League. Barlow is a life member of Omega Psi Phi Fraternity, Inc. He is a past president of XI IOTA, and he has served as its treasurer for the past twenty-one years. Barlow is active with Mount Zion First Baptist Church, where he was past chairman of the trustee board, a member of the building committee, and finance committee.

The Omega Psi Phi Fraternity Inc. was founded Nov. 17, 1911, by three Howard University students — Edgar A. Love, Oscar J. Cooper, and Frank Coleman — with the aid of their undergraduate advisor, Ernest E. Just. It is the first international fraternal organization to be founded on the campus of a historically black college. The motto of the fraternity is “friendship is essential to the soul.” Manhood, Scholarship, Perseverance, and Uplift are its cardinal principles.
Contact
IX IOTA Chapter
Melvin Burruss
917-693-3041
http://www.cajscholarshipfoundation.org 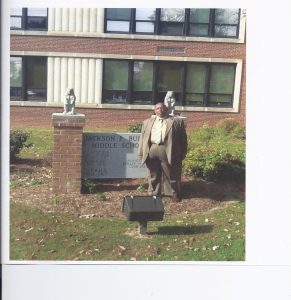 Omega Citizen of the Year