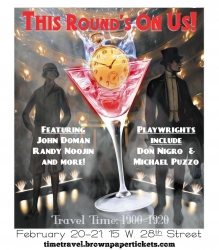 Michael Puzzo is a playwright, actor (Doubt) and a long time member The LABrynth Theater Company.

John Doman is an actor best known for playing Deputy Police Commissioner/ Major William Rawls on HBO series The Wire and is currently in Gotham.

Don Nigro is an American playwright; his plays Anima Mundi and The Dark Sonnets of the Lady have both been nominated for the National Repertory Theatre Foundation's National Play Award. Winner of the Playwright's Fellowship Grant from the National Endowment For The Arts.

Nylon, born of a fusion of New York and London creativity, a theater company committed to giving voice and perspective to established and emerging artists. We develop and produce plays that explore political, social and cultural awareness.

Tickets at the door: $20.00 @nylonfusion.org for more information and ticketing.
Advance Tickets: TimeTravel.Brownpapertickets.com