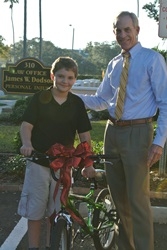 Clearwater, FL, January 28, 2015 --(PR.com)-- Eisenhower Elementary School student, Anthony Granger, was overjoyed when he woke to find a bright, green bicycle under the tree on Christmas morning. Every evening before the street lights would come on at dusk, 10-year-old Anthony loved to ride his bicycle around his Clearwater neighborhood. Sadly, just two weeks after Christmas, someone stole Anthony’s beloved bicycle. He was heartbroken.

His mother, Sarah, had been working hard and saving for the bicycle for some time. “He was so excited to get a new bicycle for Christmas. I couldn’t believe someone stole it,” said Sarah Granger. “I took to the Pay-it-Forward group I’m a member of on Facebook. I was so upset I began ranting about why anyone would take a bike from child. People offered me money, and I was appreciative, but I wasn’t looking to start a donation campaign. Someone wrote me and suggested I contact Jim Dodson because he supports safe cycling for children. So, I did, and what happened next completely shocked me,” said Granger.

After Sarah reached out to Jim Dodson, he made arrangements to surprise Anthony with a new bike. On Jan. 21, 2015, Anthony was delighted when he was surprised with a brand new, green bicycle from Clearwater bicycle attorney Jim Dodson. “I’m so happy,” Anthony exclaimed when attorney Dodson presented him with his bicycle. The young cyclist was then fitted with a new bike helmet and given a new bike light for safety. Anthony and his family were beaming with excitement as he zipped in and out of the driveway on his new bicycle. Dodson had purchased the exact model and color of Anthony’s original bicycle.

“Anthony is very passionate about bicycling. We wanted to give him the opportunity to ride a bike again because I couldn’t imagine the disappointment he was feeling from having his bike stolen,” said Dodson. Dodson is the author of the Florida Bicycle Accident Handbook, a book that teaches bicyclists how to prevent accidents and the steps to take after being involved in a bicycle accident. He is also the creator of Bikes for Kids, a program which gives five, deserving children new bicycles for Christmas every year. For more information about the Bikes for Kids program, Dodson’s book or his work on behalf of injured cyclists, please visit www.jimdodsonlaw.com.
Contact
Jim Dodson Law
Kati Jones
727-446-0840
www.thefloridabikeguy.com
https://www.facebook.com/jimdodsonlaw