Astoria, Oregon based Jesse Lee Falls, releases his most recent studio album, "Play My Guitar." This is the third album for Falls, and his first with Portland-based BentBeat Productions. 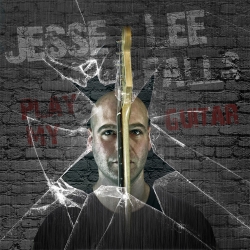 Portland, OR, May 05, 2015 --(PR.com)-- “Play My Guitar” is a collection of original songs written and performed by Astoria-based blues rock guitarist Jesse Lee Falls (www.jesseleefalls.com). The album has 10 tracks that reflect the artist’s musical journey over the last four years. “Many of the songs I’ve been playing for years for different audiences,” said Falls. “Those songs became a part of my identity as a musician and performer. But others were written very recently, even after we started the recording process. The cool thing about the album is that they all work together to sound seamless and show off what my music is about.”

The project features Jesse Lee Falls performing all lead vocals and guitars, with guest musicians and vocalists appearing on every track. “The great thing about this project is how diverse it is,” said producer Jozi Bently. “But even with such a wide array of musicians and artists stepping in to join, it’s still a really accurate picture of Jesse’s live feel. On top of Jesse’s signature lead guitar work, we added rock organs, harmonicas, and female vocalists, all of which are a part of his regular live performance but none of which he does on his own. It’s great to have all of those outside pieces in one spot and have the album still really sound like Jesse.”

Falls has been performing and recording original music since 2007, but this is the first full-length release he has created with label BentBeat Productions. “I’ve played as a solo artist and also with a specific band, but by the time I met up with BentBeat I was pretty much on my own. The label and I worked together to create an entire project that was true to my personal sound even with the presence of all the guest artists. This album really gives a better accurate representation of my music than past projects.”

Jesse Lee Falls’ album was produced by BentBeat’s Jozi Bently and Dave Beatty, who were introduced Falls in 2011 after he had just begun exploring the idea of recording a project. “It may seem like a long time to make an album,” said Beatty. “(Falls) lives in Astoria and our base of operations is just outside of Portland, so recording sessions were tricky to schedule. But Jesse is extremely talented and it was worth it to everyone to take our time on the project until we’d gotten everything to the place where we loved it. It also gave us a chance to really search around for the perfect guests artists, like Erin (Atkinson) and Jeff (Dotter),” who recorded featured vocals and mouth harp on the album respectively. “The extra time for the music to evolve and the collaborations to fall into place made for a great final product.”

“Play My Guitar” is available on Amazon.com, iTunes, Spotify, and all major music sites. A public release party will be held in conjunction with the Ground Zero 20th Anniversary Party at 8pm on Friday, May 8, 2015, at Star Theater, 13 NW 6th Avenue, Portland, OR. Jesse Lee Falls will be performing and BentBeat Productions will be present to speak with attending fans and musicians who are interested in collaborating to release their own music. Portions of Jesse’s performance will be broadcast live on FM News 101 KXL in Portland as well as radio, podcasting, and affiliates nationwide.