Last July, Daniel J. Fine was hired to manage the former Kensington Court hotel, an Ann Arbor mainstay since the 1960s, and reestablish it as the premiere place to stay and meet in Ann Arbor. 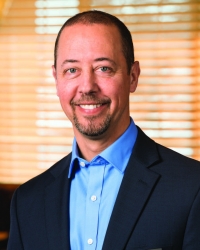 Last July, Daniel J. Fine was hired to manage the former Kensington Court hotel, an Ann Arbor mainstay since the 1960s, and reestablish it as the premiere place to stay and meet in Ann Arbor.

“Changing the street address to South State Street is going to help everyone find us faster,” Fine explains. “Anyone who knows Ann Arbor knows State Street, so there’ll be no confusion moving forward.”

Andrew Herzig, Owner of Graham’s Hotel Systems that owns The Kensington Hotel, tapped Fine for the General Manager position of both the Kensington and its next-door neighbor, Holiday Inn Express Ann Arbor.

“In Dan, we saw experience and excellence,” said Herzig. “He has vast experience in hospitality and a tremendous command of food and beverage. Dan’s enthusiasm and his ability to manage $3.5 million in renovations while upgrading our guest services made him our first, best choice,” Herzig explained. “And, the fact that he’s a big Detroit Red Wing fan certainly didn’t hurt his qualifications.”

Daniel Fine’s appointment to head up the Kensington Hotel and Holiday Inn Express caps a successful 30-year career in hospitality.

While earning his BS degree in Hospitality and minor in Engineering from Florida International University, Fine worked sports and beach bars in Miami. Since graduating, he has enjoyed hotel management positions in hotels from Grand Cayman to The Grand Hotel on Mackinac Island. Locally, Fine has also held management positions with the Townsend Hotel in Birmingham and Starwood Hotels and Resorts; including the Sheraton Novi and Westin in Southfield.

“With the Kensington Hotel renovations, we’re aiming for more of an 'urban boutique' ambience,” Fine says. “Guests will be greeted warmly by soothing grays and whites, with bold splashes of color throughout the hotel,” said Fine. “We want to make the Kensington Hotel iconic in the marketplace.” Under Daniel J. Fine’s leadership, The new Kensington Hotel is transcending Ann Arbor standards for hospitality, comfort and culture.

“There are the high brand standards that Graham’s Hotel Systems have established for The Kensington, and there are the additional “Dan Standards,” that I am establishing for the Hotel. We have to go above and beyond,” Fine explains. “The brand standard doesn’t dictate that we go out and clean snow off all the cars, but we do it. The brand doesn’t dictate that I escort guests into the elevators or slip their newspapers under their doors in the morning, but those are some of the customer service touches that help us elevate the brand.

John LeDuc, President of LeDuc Creative, one of the agencies charged with rebranding The Kensington Hotel, is impressed with Fine’s creativity and enthusiasm. “I’ve found that for every good idea mentioned in meetings, Dan has consistently taken those ideas and boosted them to the next level.”

One of those ideas is to provide transportation to and from University of Michigan games and events. “We’ve got more parking here than Downtown Ann Arbor,” Fine says with genuine, wide eyed enthusiasm. “So we can help shuttle fans to and from campus. And when they get back, they can get a bite to eat in our soon-to-be remodeled restaurant.”

Fine summed up his passion and vision for transforming The Kensington Hotel.

“A guest leaves their home. They endure all the hassles of modern transportation; the lines, the cancellations, the layovers; and when they finally reach our hotel, the first person they’ll have real human contact with is my front desk staff. When that interaction is the best, warmest, most inviting, most homelike experience of their day and their entire stay, that’s my joy. That’s what does it for me.”