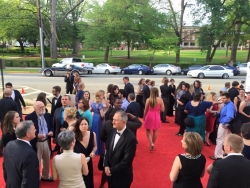 Milledgeville, GA, March 30, 2016 --(PR.com)-- For the third year in a row, the Milledgeville Film Festival will bring filmmakers, industry professionals, students and celebrities from across the globe to celebrate the illustrious art of cinema.

This year’s festival took in a record-breaking 350 submissions from more than 30 different countries; over double the number films compared to last year’s festival.

“Every year we try to take the film festival to the next level by bringing in higher selection of films, more VIP guests and new events,” said Jeremiah Bennett, chairman of the Milledgeville Film Festival Board of Directors. “And this year, I feel we definitely accomplished that.”

For a full list of scheduled events, please visit www.milledgevillefilmfest.com or search for the Milledgeville Film Festival on Facebook.

All industry panels, talks, and workshops are open to the public, however, all screenings, parties and awards show are ticket-only. Tickets are on sale at www.milledgevillefilmfest.com. Attendees are encouraged to pre-purchase their tickets, as tickets will be in high demand.

PDF of Press Release with Schedule