Esteemed Roundtable Member of America’s Registry of Outstanding Professionals, Henry E. Halladay, Has Been Recognized as Professional of the Year 2016

Henry E. Halladay of Bellevue, Washington has been recognized by America’s Registry of Outstanding Professionals as Professional of the Year 2016 for his excellence in Electrical Engineering. 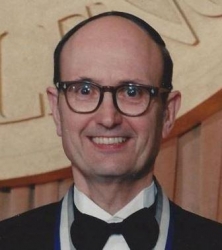 Farmingdale, NY, August 04, 2016 --(PR.com)-- Dr. Henry Halladay was born in Minneapolis, MN in 1939, managed a paper route as a teenager, joined Junior Achievement in High School and achieved Salutatorian upon graduation. His interest in science led him to take a complementary scholarship at the University of Chicago where he pursued a career in Physics. During a summer employment at a computer disk manufacturer as a technician, he decided Electrical Engineering career appeared as a better career choice and so after 3 years at Chicago he transferred to the University of Minnesota where they had a well-recognized Engineering School. He graduated with a BSEE with Honors in 1961, followed by a MSEE in 1963 and PhD in 1967. He was selected to join Eta Kappa Nu and Tau Beta PI honorary societies in 1962. He married his high school sweetheart, Diana, in 1960 and moved his Family to Washington State in 1967 to work for the Boeing Company. His initial work at Boeing involved research of microwave integrated circuits for phased array applications. He was selected to the Order of the Engineer in 1986 and became a registered Professional Engineer in Washington in 1972. Dr. Halladay has supported numerous Boeing projects over his 40 years with Boeing, including aircraft components and subsystems, satellite components and subsystems, communication systems, electromagnetic compatibility issues, and computer simulations of circuits, subsystems and systems. In addition to hardware design, implementation and delivery, he has been involved with computer systems, software and networking. He has had experience with computer languages including FORTRAN, C, Visual Basic, IEEE 488 instrumentation control and Ethernet protocols for instrumentation command and control. Dr. Halladay was instrumental in the development of a state-of-the-art Signal Analysis Laboratory for component, subsystem and system analysis, verification and validation. Dr. Halladay has published 4 articles in international publications, has 4 patents, and numerous awards granted by the Boeing Company divisions, including Special Incentive in 1979, Outstanding Performance in 1988 and a Continuous Quality Improvement award in 1994. In recognition of his accomplishments, the Boeing Company selected him as Associate Technical Fellow in 1991, Technical Fellow in 1995 and Senior Technical Fellow in 1999. Dr. Halladay has participated in Executive Training programs 2001 and 2003 at the Boeing Training Facility in St. Louis. Dr. Halladay was recently elected to Senior Member of the Institute of Electrical and Electronic Engineers. Dr. Halladay has hobbies involving gardening, cat and dog pets, computer applications involving video surveillance, programmable home lighting, remote security applications for cell phones, 3D printing and DVD learning. His philosophy is "You should never stop learning and trying new things."

The Professional of the Year membership in America’s Registry is awarded to those candidates who have achieved recognition in their respective industry or profession for their accomplishments and who have established a commendable reputation. This membership honors individuals who have reached the highest standards of business practices and, as such, should be recognized for their standings in the business world. America’s Registry is pleased to honor Henry E. Halladay for his achievements in Electrical Engineering.
Contact
America's Registry of Outstanding Professionals
Bea Hanley
516-997-2525
www.americasregistry.com