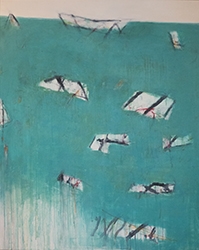 Houston, TX, January 18, 2017 --(PR.com)-- Houston gallery, Laura Rathe Fine Art, announces the exhibition "Cosmic Scale," a solo exhibition by second generation abstract expressionist Tony Magar, with an opening reception on Thursday, February 9th, from 5 – 8pm at 1700 Post Oak Blvd. Still painting at the age of eighty, Magar is one of the last surviving artists belonging to this most important, quintessentially American art movement. The exhibition will be on view from February 9th through March 9th, 2017.

Cosmic Scale is the culmination of a long career and over half century of the inseparable link of the artist's work to music. This show is in part dedicated to and inspired by the great musician, John Coltrane and his cosmic scale. Magar’s great respect for musicians has been a significant influence for his painting through the decades. In describing the feeling for this show, Magar said,

“It’s taken me years to understand that music and art are inseparable. To comprehend the complexities of the musical giants of our century has been a journey of love, homage, and gratitude; one that has always kept me growing as an artist.”

The results reflect an intimacy between art forms, and the spirit of “genius” developed through a long and noted career.

About The Artist
Born in London, Tony Magar began his artistic career studying at the Royal Albert Hall School. In his early twenties, he moved to New York City and joined the legendary Martha Jackson Gallery where he participated in the landmark exhibition, New Forms, with Jasper Johns, Robert Rauschenberg, John Chamberlain, and Claus Oldenburg, as well as earlier masters, Dubuffet, Schwitters, and Arp. In 1960, with the help of Mark di Suvero, whom he apprenticed with for 7 years, Magar co-founded the Park Place Gallery and named Paula Cooper the director.

Magar moved to Taos, New Mexico in 1976 and became one of the most well respected painters in the contemporary art scene in Taos and Santa Fe. By the mid-eighties, Magar split his time between Taos and Houston. He now lives on the bay in Portland, TX.

About Laura Rathe Fine Art
With over 25 years’ experience in the industry, gallery owner, Laura Rathe, started her career working as a private art dealer before establishing Laura Rathe Fine Art (LRFA) in 1998 in Houston, Texas. LRFA now operates out of two locations in Houston and a third gallery in Dallas on Dragon Street, the city’s premiere arts district destination. Since the gallery's inception, LRFA has established itself as a leading contemporary art venue, offering an impressive range of exhibitions and programming to its patrons in both cities.

For additional information, details or to schedule an interview, please contact