Ragan Whiteside, the flautist-singer who catches the ear like few in the world of contemporary jazz can, is getting ready to make waves this May 12th with the release of her fourth studio album, Treblemaker. 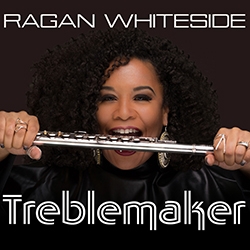 Ragan Whiteside, the flautist-singer who catches the ear like few in the world of contemporary jazz can, is getting ready to make waves this May 12th with her fourth studio album, Treblemaker.

A favorite of well-known stages such as Capital Jazz, Whiteside’s sound brings to mind the stylings of Najee and Dave Valentin. The preceding album, Quantum Drive, has received major airplay and acclaim by such publications as Jazz In M.E.E., and was described as "an enchanting and vibrant album" by Hans-Bernd Hülsmann of smooth-jazz.de. As its successor, Treblemaker promises a further expanse of Whiteside’s variety and style. Frank McComb, Kim Waters, Marion Meadows, and Tom Browne make their appearances on the album to lend their touch to a well-seasoned musical mix.

Whiteside is not one to shy away from shaking up expectations. In contemporary jazz, where there is always a thirst for fresh material, she steps up and delivers, both in studio recording and on live stage. "Her tenacity makes her a force to be reckoned with. Mark my words!" said Bob Baldwin of her once, and this tenacity is obvious at every show and in every track. "We need new music," the fans say, and Ragan Whiteside is always up to deliver exactly what they ask for.

Still a New Yorker at her core and in her every note, Ragan Whiteside brings no shortage of sound to shake up some perceptions of what a flute – and a jazz artist – can do.

Songwriter, flutist, vocalist, and all-around musical adventurer Ragan Whiteside is back in the studio. For those who know her, this should be a signal to rub hands together in anticipation, and for jazz lovers who have not yet met her, it’s more than ample invitation to see what she can do.

A musical prodigy since the age of five, Ragan found her way to the flute after the piano, the violin, and a turn with the drum set. She attended the Cleveland Institute of Music and the prestigious Harid Conservatory, where her sound was honed with the tried-and-true classical training, graduating with a Bachelor of Music Performance degree.

After school ended, Ragan found herself in New York and immersed herself in the world of jazz, funk, and R&B, going on to collaborate with contemporary heavyweights such as Patrice Rushen, Bob Baldwin, Chieli Minucci, and Frank McComb. Since her debut with Class Axe, Ragan honed her arranging and songwriting skills alongside Bob Baldwin and acclaimed producer/arranger Dennis Johnson, and focused on the deeper inner workings of producing and releasing music. Her third studio album, Quantum Drive, much like her sophomore album, Evolve, is a showcase of her wide variety of talents, from her sleek and immediately recognizable singing voice to the on-point arrangements and composition. The albums flow along a variety of musical styles, the sounds never parking themselves too long in one genre or another, but blending all in various proportions, so that no aficionado of one genre or another is left wanting.

Randis Music is a record company founded in 2007 by contemporary jazz flutist/vocalist Ragan Whiteside and producer/engineer Dennis Johnson. While creating and producing music on their own in a dramatically changed digital music world, Whiteside and Johnson felt a need to combine their musical prowess along with their professional business savvy to create a unique sound and approach to get their brand of music heard. Constantly pushing the musical envelope and thinking way beyond the norm, Randis Music continues to break from the norm while gaining the respect of even the most critical listening audience.