In the wake of national controversy around the "politicization" of Shakespeare, specifically reflected in The Public Theater's production of "Julius Caesar," one small, suburban theater company in Hillsboro, Oregon is calmly wading into the fray. Bag&Baggage Productions is presenting a world premiere adaptation of Shakespeare's "Romeo and Juliet" fused with the 12th century Muslim Persian poet Nizami Ganjavi's masterpiece "Layla and Majnun." 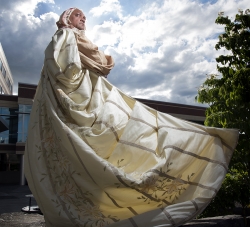 Hillsboro, OR, June 24, 2017 --(PR.com)-- In the wake of The Public Theater’s politically charged Julius Caesar, in which a Trumpian-clad Caesar faces the assassin’s daggers, death threats are being levelled against Shakespeare-producing theaters across America. In Boston, Massachusetts, New York, and Texas, theaters with “summer Shakespeare” in their repertoire are experiencing backlash against the “politicization” and “liberalization” of Shakespeare’s works.

Meanwhile, in sleepy suburban Hillsboro, Oregon a small professional theatre is quietly taking Shakespeare’s Romeo and Juliet back to its Islamic roots in a production being embraced by the community. The world premiere adaptation from Bag&Baggage (B&B) Productions features text from 12th century Sunni Muslim poet Nizami Ginjavi’s epic Layla and Majnun, often ascribed as an indirect influence on Shakespeare’s tragedy.

In Nizami’s 4,000 verse poem, two young lovers reject the edicts of their parents, embrace their forbidden love, and pay the ultimate price. Along the way, there are banishments, arranged marriages, bad advice from spiritual figures, and ‘love as madness’ metaphors aplenty. The B&B production relocates the action of Shakespeare’s play to 12th Century Persia, immediately prior to the European Crusades.

“The story of Layla and Majnun has been called the single most important poetic work in the literary history of the Middle East,” says Scott Palmer, B&B’s Founding Artistic Director and the adaptor of the work. “Scholars note that Nizami’s 12th Century masterpiece was, in fact, influenced by earlier Arabic folk stories from the 6th and 7th Century. Tracking the journey of Layla and Majnun from ancient Iran to Strattford-Upon-Avon is tricky, but the parallels are too numerous to ignore. In many ways it is possible to argue that Romeo and Juliet were born not in Verona but rather in the deserts of Arabia in the 6th century.”

The cast and crew of the production, called Romeo&Juliet (Layla&Majnun) features three artists of Persian decent, including Melory Mirashrafi, a 20 year old first-generation Iranian-American as the Assistant Director, Avesta Mirashrafi, her 17 year old younger brother who is a junior at Hillsboro High School, and Mandana Khoshnevisan, a second generation Iranian-American.

“The script is more of a mash-up of the two stories,” said Palmer. “What we have tried to do is explore the similarities between the two poetic and highlight them for our audiences. For example, Juliet’s ‘gallop apace’ speech from Shakespeare’s has numerous corollaries in the Nizami, so we blended those images and that text together. It isn’t Shakespeare, and it isn’t Nizami; it is a blending of the two.”

While audiences in New York may be poised for interruptions and catcalls from protesters during performances, the broader community in Hillsboro has more than embraced the B&B production. Performances will take place outdoors in Hillsboro’s Civic Center Plaza, in the heart of the city’s historic downtown and on the doorstep of the City Hall.

“Over the past few weeks, our cast and crew have been invited to Ramadan dinners, engaged in conversations with communities of faith, and talked with patrons about the debt that the greatest romantic tragedy in Western literature owes to the Middle East and, in particular, to a Muslim poet from ancient Persia,” said Assistant Director Mirashrafi, who is working on translating some of the text into Farsi and training the actors on pronunciation and cultural norms. “For me, being a part of a production that celebrates the history and literature of Persia, that embraces intersectionality, the connection between the cultures of the east and west, and that shows our audiences Iranian faces that aren’t painted by extremism or terrorism is absolutely crucial.”

Performances take place outdoors at the Tom Hughes Civic Center Plaza in downtown Hillsboro on Thursday, Friday, and Saturday evenings from July 20th – August 5th. Patrons may visit bagnbaggage.org for more information and to purchase tickets. The Bag&Baggage box office can be reached at 503 345 9590.

Romeo&Juliet (Layla&Majnun) is adapted and directed by Scott Palmer, with costume designs by Melissa Heller, and lighting and set design by Jim Ricks-White. The cast includes Nicholas Granato as Romeo/Majnun, Arianne Jacques as Juliet/Layla, Lawrence Siulagi as The Sayyed, Signe Larsen as Tybalt, Eric St. Cyr as Ibn Salam, Colin Wood as Nawfal, Gary Ploski as The Storyteller, Mandana Khoshnevisan as Lady Capulet, Cassie Greer as Benvolia, and Avesta Mirashrafi as Abram.

About Bag&Baggage Productions: Bag&Baggage is committed to provocative, innovative interpretations of classical works of American and English Drama. Through the use of major literary adaptations and inventive stagings, the company seeks to reconnect the great works of drama to new audiences. Bag&Baggage is the only professional theatre in Hillsboro, Oregon and was a recipient of an American Theatre Wing National Theatre Company award in 2015. www.bagnbaggage.org. 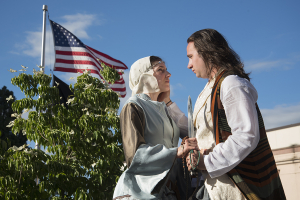