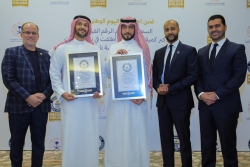 Riyadh, Saudi Arabia, October 10, 2018 --(PR.com)-- The Kingdom of Saudi Arabia accomplished a new Guinness world record for the largest fireworks display launched simultaneously in several cities across the Kingdom. The Guinness Book of World Records had announced on Wednesday that the General Entertainment Authority succeeded in setting this new record with 962,168 fireworks, breaking the previous record of 810,000 fireworks set by the Philippines in 2016.

The Kingdom’s record-breaking fireworks display was launched in 58 different locations throughout different cities viewed by millions of spectators.

Commenting on this major accomplishment, Mr. Amr Banaja, Chief Executive Officer of GEA expressed the GEA’s pride in achieving this world record is an achievement dedicated to the Kingdom of Saudi Arabia on this valued occasion.

Mr. Amr Banaja added that this was made possible thanks to the hard work and dedication of a young enthusiastic Saudi team.

GEA had also previously accomplished a Guinness record on the 88th National Day for the biggest flag painted in the sky with fireworks and drones in the cities of Riyadh and Jeddah.

Furthermore, GEA had organized on the 88th National Day more than 90 events that varied between arts and culture, circus performances, and fireworks displays in various locations across the Kingdom.

The General Entertainment Authority contributes to supporting the Saudi economy by participating in diversifying its sources, raising its gross domestic product, supporting small and medium enterprises and increasing the proportion of foreign direct investment in the entertainment sector.