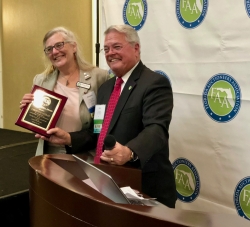 Ocala, FL, October 18, 2018 --(PR.com)-- Christine (Chris) Dudley, a Florida Auctioneer based in Citrus County with Tranzon Driggers, was recently honored with the Lewis C. Dell Florida Auctioneers Association (FAA) Hall of Fame Award at the 52nd Annual Conference held Oct. 14 and 15 at the Hilton Orlando in Altamonte Springs, FL. This prestigious award is bestowed upon one Florida auction professional each year and recognizes outstanding service and dedication to the FAA and auction profession.

Chris has been involved in the auction industry for more than 20 years and previously served as President of the Florida Auctioneers Association. Her interest in antiques initially drew her to the auction profession. She now primarily focuses on real estate auctions serving the needs of estate and private sellers.

The Lewis C. Dell Auctioneer Hall of Fame Award was named in honor of the late Lewis C. Dell, a well-known auctioneer from Sanford, FL who was integral in getting auction license laws passed in the state. A charter member of the FAA, Dell served as president in 1979 and was the first recipient of the Hall of Fame award in 1985. This award holds special significance as it is voted on by past honorary recipients.

Tranzon Driggers is a member company of Tranzon, LLC. Tranzon is one of the largest real estate auction companies in the country, with 30 offices coast-to-coast. Tranzon’s accomplished auction professionals are widely recognized as leaders in the auction industry. All Tranzon companies are independently owned and operated.
Contact
Tranzon Driggers
David Bradshaw
877-374-4437
www.tranzon.com