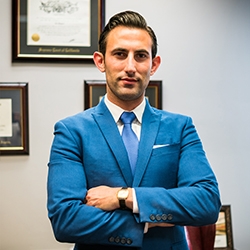 OC Weekly is a free weekly paper distributed in Orange County and Long Beach, California with weekly total readership of 594,664.

Mr. Razavi is an Orange County native, having been born and raised in Mission Viejo.

The concept behind Mr. Razavi's law firm was influenced by his family. His father, Amir Razavi, is a successful entrepreneur and businessman in the field of medicine, specifically in the area of stem cell therapy, and his grandfather was an attorney, diplomat and ambassador.

During Mr. Razavi's quest to master the intricate details of negotiations, he observed a subtle nuance that would become the vision for RLG. He noticed that not everyone was capable of effectively using their voice to communicate their problems, that not everyone could stand up for themselves.

Mr. Razavi discovered that the specific set of skills he had cultivated throughout the years could help assist everyday individuals combating against intimidating insurance companies and employers. As a result, he started a law firm where people's voices could actually be heard.

At RLG, the mantra is "Let Your Voice Be Heard." Mr. Razavi successfully created a vehicle to help people who had been harmed by large corporations because of a lack of resources and intimidation. RLG focuses on communication and the clients' overall experience, so the attorneys can properly step into the shoes of their clients during representation and bring the fight that their clients could not bring alone.

Razavi Law Group, APC, focuses on personal injury (motor vehicle and pedestrian accidents, dog bites, catastrophic injuries, etc.) and employment law (wage and hour violations, harassment, and wrongful termination). However, if you have a case that RLG cannot assist you with, the firm will be happy to refer you to an attorney who can.
Contact
Razavi Law Group
Ali Razavi
(949) 734-0476
http://www.razavilawgroup.com